That appears to be exactly what just happened with Washingtonian, a monthly magazine in the D.C. area. The publication is known for its coverage of local figures in culture and business, and its pages serve as a sort of “who’s who” guide to the capital city.

For its October issue, Washingtonian prominently featured “Women in Washington,” with profiles of 150 successful women. Its cover showed 14 of those rising females … or at least it would have.

Instead, the magazine dedicated one of its glossy cover positions to a person who was born male.

And that wasn’t all: A second transgender individual was also given a spot on Washingtonian’s “150 Most Powerful Women” list. 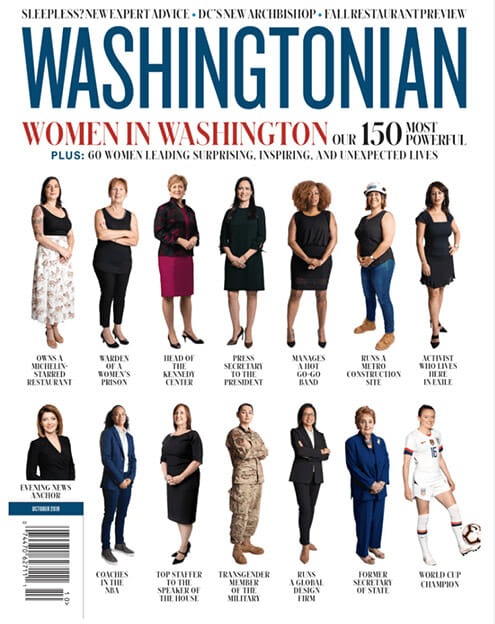 That isn’t a big deal until you remember that the “Women in Washington” list has a limited number of slots. In other words, its editors essentially decided to exclude two women from its issue about women, replacing them with men.

As Breitbart pointed out last week, the head-scratching decision ironically appears to diminish the very people the magazine claimed to honor, and it’s yet another example of the hypocritical mess of liberalism these days.

“The two men included in the women’s list have their own accomplishments,” Breitbart’s Neil Munro noted. “One is Martine Rothblatt, who created the Sirius XM satellite-radio business and launched a pharmaceutical company, United Therapeutics. The other is Alexandria Holder, a U.S. Air Force sergeant and linguist.”

There’s no reason to say those individuals don’t deserve to be recognized for their work. The thorny issue, however, is whether it makes sense to place them on a list meant to honor women.

“But the two men’s inclusion automatically means that two women get excluded — and it boosts the transgender ideology’s claim that the two men become women merely because they say they are women, regardless of biology, physiology, and political preferences,” Munro wrote.

In other words, why have a “Women in Washington” issue that isn’t reserved for women?

The publication could have called the list “People of Washington” or something similar; instead, it seems intent on pretending that all it takes to be a woman are a few lifestyle changes.

Of course, whom a privately owned magazine wants to feature in its pages is its own business. Yet the Washingtonian “Women” issue is another data point in the alarming trend of women being overlooked and even blocked due to men who declare that they’re transgender.

“Men who could not win and have restyled themselves as women to get first place in athletic competitions …  [and] the women who have worked hard in their athletic endeavors are no longer placed first, second, or third,” Anne Schlafly Cori, who chairs the pro-family Eagle Forum, told Breitbart.

Indeed, The Western Journal has covered numerous instances of that exact scenario happening. In some cases, women and girls are being pushed off the podium or having their dreams dashed because males with clear biological differences are dominating the sport.

“Women have spent decades trying to break the glass ceiling and now there is a new ceiling [of] men masquerading as women,” Schlafly Cori said.

Is this fairness? Is this pro-woman?

Voters turned out in record numbers for the Georgia primary, contrary to liberal claims that a new voting law would suppress turnout.
By Jack Davis  May 25, 2022

An NBA coach who said the system fails school children was one of those who backed removing armed police from schools.
By Jack Davis  May 25, 2022

This tweet, like many of Ocasio-Cortes' posts on social media, shows she is far more impulsive than she is intelligent.
By Elizabeth Stauffer  May 25, 2022

State Farm has pulled its support for a controversial project aimed at pushing the LGBT agenda among young children.
By Jack Davis  May 25, 2022

For Ramos home was no sanctuary. Neighbors said that Ramos' mother used drugs and she and he would have fights with each other often.
By Andrew Jose  May 25, 2022

With gas costing more than $6 per gallon in the state, many Californians willingly surrendered their firearms to help fill their tanks.
By Richard Moorhead  May 25, 2022

Buck Angel, a 59-year-old, was a pioneer in transgender therapy and activism. Now, she's sounding the alarm.
By C. Douglas Golden  May 25, 2022

Naomi Osaka withdrew from the French Open last year after refusing to meet with the media. This year, the decision to exit was made for her.
By C. Douglas Golden  May 25, 2022

'My little love is now flying high with the angels above,' the father of 10-year-old Amerie Jo Garza said in a Facebook post.
By Jack Davis  May 25, 2022
Next