Uvalde Shooter's Dad Couldn't See His Son Because of Thanks to COVID Safety Procedures, Radical Changes Were Noticed Much Too Late

For some media outlets and liberal activist groups, the death of Daunte Wright in a Minneapolis suburb wasn’t enough — they had to lie about the police to make it worse.

As protests over Wright’s shooting on Sunday rocked Brooklyn Center, Minnesota, the American Civil Liberties Union and the Daily Mail both elected to spread an unverified and frankly ridiculous rumor.

According to both, Wright was originally pulled over for a seemingly spurious reason, kicking off the chain of events that led to him losing his life, and mobs taking to the streets.

The Daily Mail struck first, publishing a Twitter post Monday that claimed: “Black Minneapolis man, 20, is shot dead by cop after being pulled over for ‘air freshener hanging from mirror’.”

Black Minneapolis man, 20, is shot dead by cop after being pulled over for ‘air freshener hanging from mirror’ https://t.co/WgGbiPxJWm pic.twitter.com/wJIAdYDKv1

Some Twitter users called the outlet out on its “story” soon enough, with one user telling the Daily Mail to “spin harder.”

Another user rhetorically asked if it “was the only reason” for the traffic stop, seemingly knowing how Daily Mail was corrupting the truth of the event.

is that the only reason?

The ACLU joined in on the Daily Mail’s wild spin around noon the same day, tweeting, “On Sunday afternoon in Minnesota, Daunte Wright was shot and killed by police after being pulled over, allegedly due to air fresheners hanging in his rearview mirror.”

Unfortunately, it seems as though too many were fooled by the ACLU’s biased spin of events. One user angrily replied to the organization’s “report,” asking if “using air freshener while black” is a crime.

Related:
Uvalde Teacher Texts Husband 'Help' During Shooting; He Interrupts His Haircut to Request 1 Weapon from the Barber 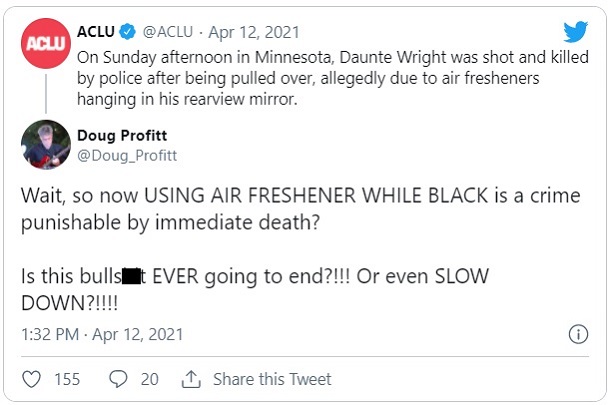 The dishonesty is palpable.

It’s not like the normally conservative Daily Mail and the typically liberal ACLU are spreading their fake news to any small group of people. The ACLU has over 2 million followers on Twitter. The Daily Mail US is an edition of the newspaper based in the United Kingdom. While the Daily Mail US Twitter account as 335,000 followers, the Daily Mail Online account has 2.6 million.

These outlets are spreading disinformation fast and hard, and it will inevitably harm public discourse in the future.

The ACLU even double-downed on its original false report, tweeting in a thread from their original that stated, “Police still exist to uphold white supremacy.” 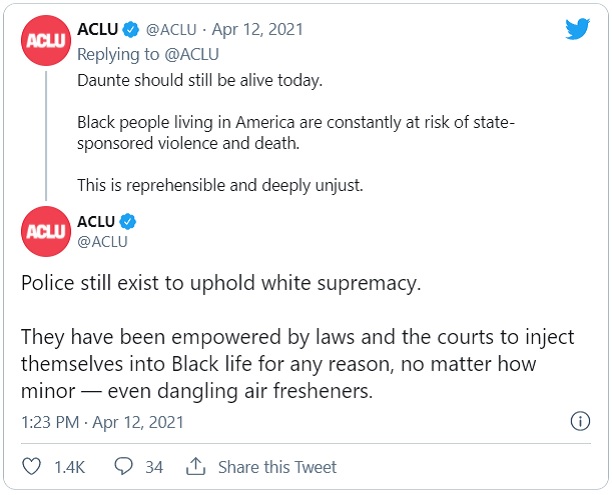 Even NBC attempted to push the “air freshener” angle in an article, writing in a Monday article’s subhead, “The police confrontation escalated after officers saw what could have been an air freshener hanging illegally from the rearview mirror.”

The air freshener rumor apparently started with what Wright told his mother in a telephone call while he was being pulled over, according to The Daily Beast.

Thankfully, NBC at least outlined the true reason for the traffic stop — according to Minneapolis police chief Tim Gannon, Wright was stopped for “expired tags.”

After making the stop, officers learned there was a warrant for his arrest. It was when they tried to take him into custody that Wright decided to drive off, leading to his apparently accidental shooting by a police officer.

Unfortunately for Americans nationwide, mainstream media like the Daily Mail and activist groups like the ACLU are not always concerned with spreading the truth of a situation.

Instead, they’re focused on spinning the news and, in this case, pushing the narrative that police in the U.S. are hunting minorities, which will do nothing but stoke division and hurt the country in the future.

Uvalde Shooter's Dad Couldn't See His Son Because of Thanks to COVID Safety Procedures, Radical Changes Were Noticed Much Too Late

An anonymous donor will cover the cost of the funerals of the children and teachers killed in the Uvalde, Texas, school shooting.
By Jack Davis  May 28, 2022

National anthem protests are back in style, this time in Major League Baseball.
By Jack Davis  May 28, 2022
Next