Crazed Man Threatens to 'Shoot Up the Crowd', But Failed to Notice He Wasn't the Only One Armed

Vicky Osterweil is desperate for your attention. Again.

You may remember that Osterweil (a born male who identifies as female) was briefly famous last summer when the antifa-loving author had the felicitous timing to have a book called “In Defense of Looting” being published right as looting had briefly become the national pastime. This was compounded by an obsequious interview by NPR that infuriated conservatives and liberals alike.

NPR would acknowledge its fault for that piece, as Fox News reported in September, but Osterweil was no doubt already a beneficiary of the Streisand effect. Even if most reviewers hated the book and the philosophy behind it, the curiosity probably didn’t hurt sales. Mind you, there was also likely a bit of buyer’s remorse. I managed to “loot” the tome off of a file-sharing site and after skimming it, well, let’s just say I was more entertained and impressed by “White Fragility.” That’s saying something.

As quickly as Osterweil was part of the conversation, he wasn’t anymore. Fatuous NPR interviews and fulminating denunciations lasted a few weeks and then we moved on to provocateurs with talent.

Osterweil was like the rapper Silentó of far-left punditry — except, unlike the man behind the one-hit-wonder “Watch Me (Whip/Nae Nae),” Osterweil hasn’t been charged with murdering anyone.

WARNING: The Twitter posts below contain graphic language that some readers will find offensive.

He certainly doesn’t seem like he’s against violent crime, however, which is why we’re paying attention to him. Again. Here’s what Osterweil had to say about police in some recent Twitter posts, captured in screen shots by conservative journalist Andy Ngo.

You may not be surprised to learn that Osterweil isn’t simply talking about defunding cops:

The #antifa author of “In Defense of Looting” is inciting violence & terrorist attacks through her Twitter account: pic.twitter.com/mtHnYRlTkp

“My shrill a** self thinks there’s only one thing to do. ATTACK,” Osterweil tweeted early Sunday morning. “This is not the time for defense, respectability, reorganization. We gotta take what we got and throw it at the motherf******, because at the moment those two pincers (anti-trans, anti-protest) are deeply unpopular”

“f*** that, f*** 12, f*** the national guard, trans girls are gonna rip apart your f****** transport carriers and force femme you with glitter bombs and molotovs,” he tweeted in a separate missive.

(For those who might not have heard it before, “f*** 12” is slang for “f*** the police.” It’s unclear where the phrase originated, although Vocativ reported in 2014 that the “12” refers to narcotics officers. While we’re at arcane slang you might not be familiar with, Osterweil’s Twitter user name — @Vicky_ACAB — includes the popular far-left acronym which stands for “all cops are b***ards.”)

But for Osterweil, it’s not his own vile output that was the cause of the public reaction. Instead, he blamed Ngo.

Far-left extremist Vicky Osterweil (@Vicky_ACAB) has locked down her Twitter account so that she cannot be reported for inciting violence & terrorism. @NPR, funded in-part by the public, invited her on last year to promote her extremist book. pic.twitter.com/BoH6UvmEDJ

“ah that’s why the worms are swarming, because the dude who provides kill lists for atomwaffen is p***ing his pants about my tweets,” Osterweil wrote.

Far-left extremist Vicky Osterweil (@Vicky_ACAB) has locked down her Twitter account so that she cannot be reported for inciting violence & terrorism. @NPR, funded in-part by the public, invited her on last year to promote her extremist book. pic.twitter.com/BoH6UvmEDJ

Let me decode Osterweil’s tweets, because it’s an impressive guide to how hypocritical Twitter is — and how deluded Osterweil is about his beliefs.

First, “Atomwaffen” is a neo-Nazi group, as The New York Times has reported. Far-left trolls have tried to tie the group to Ngó in a desperate attempt to smear him. Those smears are nothing new, but the second tweet would be hilarious if the truth behind it weren’t so frightening: “Chud” is a slur recently adopted by the left to describe conservative figures.

Yes, at the same time Osterweil is calling for violence against police officers, he’s also amazed that Ngó hasn’t been censored by Twitter for reporting on the cretinous things antifa or antifa-adjacent individuals do.

Now that Osterweil protected his Twitter account, the only thing most people can see is his profile picture, an altered screenshot from the 8-bit Nintendo game “Skate or Die,” altered to read “cops got way too many teeth these days.” 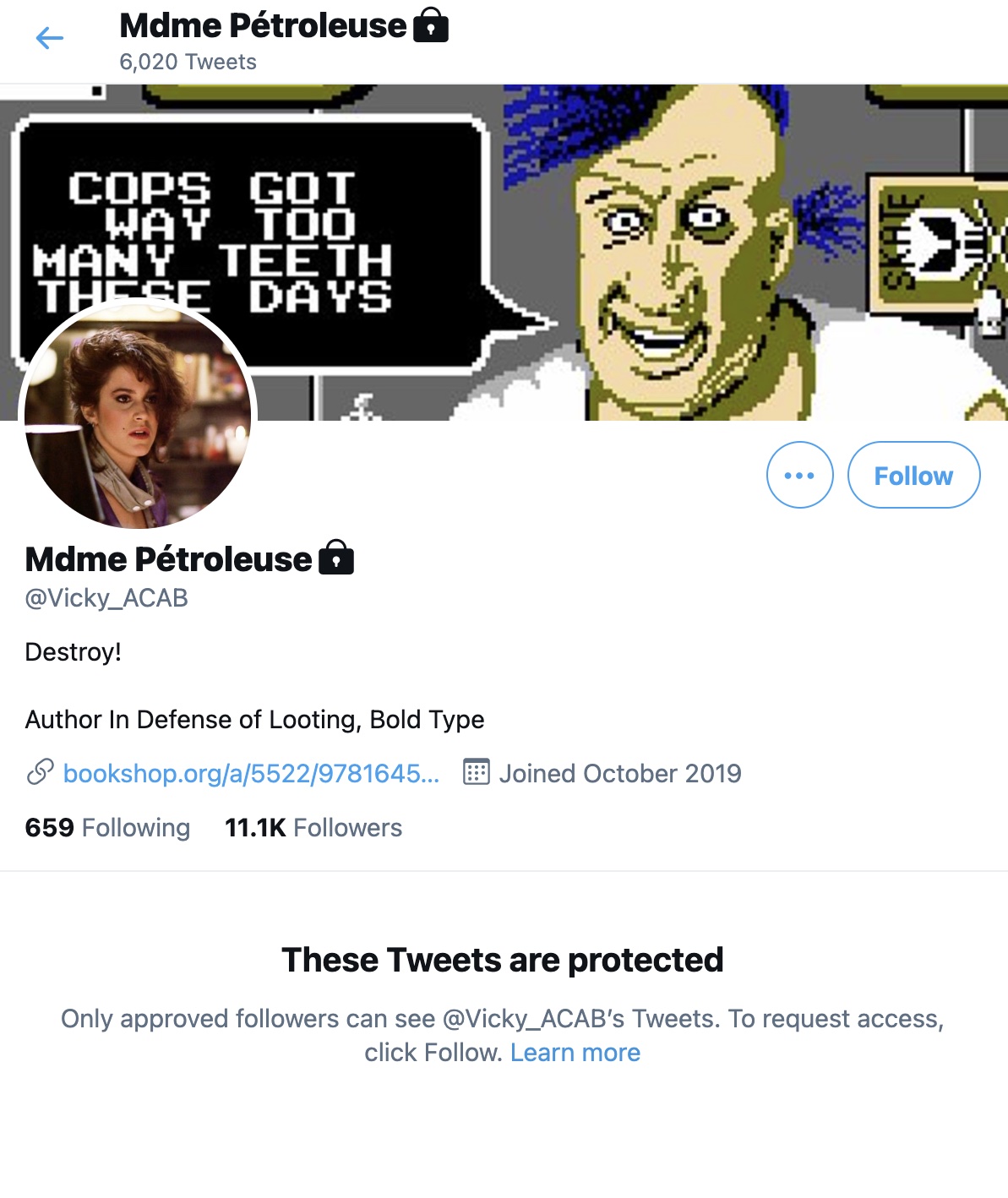 Even with a header picture that’s a not-even-veiled threat against police officers, Osterweil still has an active Twitter account. If he wanted to unprotect his tweets and start spewing garbage again to the world at large, he could.

That wasn’t an option available to the New York Post, though, when it found itself locked out of its account after it reported on Hunter Biden’s laptop in October.

It’s not an option available to Donald Trump. He’s banned.

It’s not an option for James O’Keefe or Project Veritas; the undercover investigative journalism organization and its founder have both been deep-sixed by Twitter.

O’Keefe had his account banned last week — just coincidentally after Project Veritas released a series of videos showing a CNN director who admitted the network played up COVID fear for ratings and called the network’s coverage of both Donald Trump and Joe Biden “propaganda” designed to influence the outcome of the 2020 election.

The Project Veritas account was permanently suspended in February, as the New York Post reported at the time.

If Twitter suspends or bans conservative voices for spurious reasons, but won’t take action against activists on the left for outright threats against police officers, there’s something deeply wrong.

Osterweil knows he’s safe, too. And that’s the sickening thing:

In an era where the so-called “chud reckoning” could lock a newspaper like the New York Post out of its account in the midst of the election, Osterweil knows his desperate grasp for continued relevance won’t end with anything more than a slap on the wrist.

Crazed Man Threatens to 'Shoot Up the Crowd', But Failed to Notice He Wasn't the Only One Armed

Things got bad at a Florida party. First a fight, then a threat to shoot everyone. But a man with a concealed carry permit solved things.
By Mike Landry  August 10, 2022

In a never-submitted letter of resignation to Donald Trump, Gen. Mark Milley accused him of 'ruining the international order.'
By Elizabeth Stauffer  August 10, 2022

In Custer County, Oklahoma, a wind turbine suffered an epic fail after a strong storm moved through the region on Tuesday.
By Jack Davis  August 10, 2022

The left immediately blamed Donald Trump and the right for the murders of Muslim men in New Mexico, then the truth came out.
By Warner Todd Huston  August 10, 2022

Op-Ed: The Plot Thickens in Gaza and Iran, Undeterred by Biden

The writing is on the wall regarding an immense conflict in the Middle East - very possibly involving nuclear weapons.
By Ben Kerido  August 10, 2022

A president who brags about a fake accomplishment like this is just advertising how few accomplishments he actually has.
By Joe Saunders  August 10, 2022

Would-be thieves allegedly broke into a pricey Los Angeles home thinking they would score big, but they were in for a surprise.
By David Zimmermann  August 10, 2022

'We remain ready to employ a number of response options in defense of North America and Arctic sovereignty,' NORAD said.
By Andrew Jose  August 10, 2022

Two immigration experts spoke with The Western Journal, discussing how Biden's new asylum strategy could label immigrants something else.
By David Zimmermann  August 10, 2022
Next