Twitter has permanently banned conservative journalist James O’Keefe from the platform after he and Project Veritas in recent days posted videos of an investigation into CNN.

It appears as though the Big Tech giant that now runs and moderates a large part of the American public debate is still protecting Democrats and those whose interests are intertwined.

This time, O’Keefe must have hit too close to home. 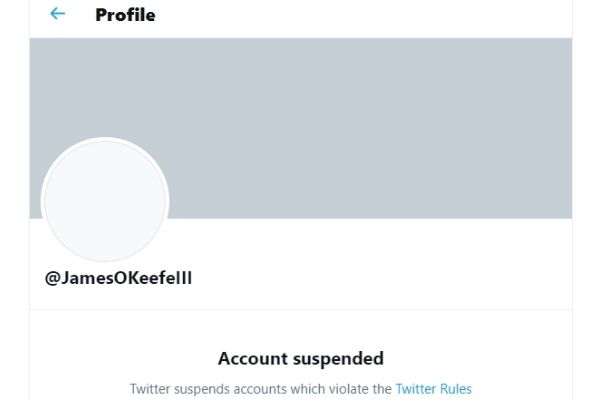 The suppression of truth from actual journalists never ends.

Just months after Twitter suspended the New York Post for reporting damning information from a laptop that reportedly once belonged to Hunter Biden, the son of then-Democratic presidential candidate Joe Biden, the supposedly unbiased social media platform on Thursday locked O’Keefe out of his account — for good.

A Twitter representative told Project Veritas that O’Keefe, who was nearing 1 million followers, will never be allowed back on the platform, while also accusing him without evidence of operating fake accounts.

The company said O’Keefe was banned “for violating the Twitter Rules on platform manipulation and spam.”

“A Twitter spokesperson pointed us to a section in the company’s rules which state: ‘You can’t mislead others on Twitter by operating fake accounts,’ and ‘you can’t artificially amplify or disrupt conversations through the use of multiple accounts,’” Project Veritas wrote in a blog post confirming its founder’s suspension.

“I am suing Twitter for defamation because they said I, James O’Keefe, ‘operated fake accounts.’ This is false, this is defamatory, and they will pay,” O’Keefe said. “Section 230 may have protected them before, but it will not protect them from me. The complaint will be filed Monday.”

O’Keefe’s presence on Twitter will be missed. For years now, the intrepid reporter has been a beacon of hope and light for people left in the dark by agenda-driven establishment media outlets.

His latest video drops targeted one of those outlets — CNN — in a series that purported to show a network insider bragging about helping to mislead voters before the 2020 election.

Related:
Exposed: Leftist Assistant Principal Confesses Woke School's Game Plan on Camera, Tells How They Get Away with It

Many conservatives called out Twitter and its founder, Jack Dorsey, over the move.

O’Keefe exposes CNN for lying about me and Donald Trump for propaganda.

It is no surprise that someone as high-profile as O’Keefe would be silenced. Big Tech has spent months now ensuring that conservative voices — or any voices that could pose a real threat to the left’s stranglehold on information — are muzzled.

The question is: Will anything be done about it?

Will elected Republicans finally stand up to the Silicon Valley information cartels, or will they cower and do nothing, again?

O’Keefe and Project Veritas work on behalf of the American people by going after enemies of freedom and truth. Like the once-sitting president of the United States, Donald Trump, he’s been silenced by a company that should be regulated as the public utility it has become.

Technology and Twitter’s use of it have outgrown the outdated protections gifted through Section 230 of the Communications Decency Act of 1996.

The company is already sheltered by the federal government from anything O’Keefe or others who have been banished posted on the platform. The company had no legal or civil incentive to ban him — minus the fact that O’Keefe was an enemy to the one-party state.