People don’t celebrate Thanksgiving in France, or Russia, or South Africa — but they do shop on Black Friday.

The U.S. sales phenomenon has spread to retailers across the world in recent years with such force that it’s prompting a backlash from left-leaning activists, politicians and even consumers.

Near Paris, climate demonstrators blocked a shopping mall and gathered in from of Amazon’s headquarters to protest over-production they say is killing the planet. Workers at Amazon in Germany went on strike for better pay. Some French lawmakers want to ban Black Friday altogether.

Consumer rights groups in Britain and some other countries say retailers use Black Friday as a slogan to lure in shoppers, but it’s not always clear how real or big the discounts are.

“The planet burns, oceans die, and we still want to consume, consume, and therefore produce, produce — until we eradicate all living things? … We will not betray our children for a 30% discount!” reads a dramatic manifesto by groups holding “Block Friday” protests around Paris.

Globalized commerce has brought U.S. consumer tastes to shoppers around the world, from Halloween candy to breakfast cereal and peanut butter, sometimes even supplanting local traditions.

To some activists on the left, Black Friday is the epitome of this shift, a purely commercial event designed to boost U.S. retailers ahead of the Christmas holidays, the symbol of capitalism run amok.

In Britain, where the big winter sales have traditionally been held on the day after Christmas, companies have adopted Black Friday marketing campaigns since about 2010. After a rise in business on the day in the first years, the volume of shopping has leveled off, with most of it happening online over multiple days.

Research by a U.K. consumer association found that 61 percent of goods advertised in Black Friday deals last year were cheaper or about the same price both before and after the event.

That echoes similar warnings in other countries. Russia’s consumer watchdog published detailed tips on how to avoid getting fooled, like checking whether prices were raised before Friday to make deals look good or whether delivery costs are inflated.

The Black Friday advertising push has extended beyond the one day to Cyber Monday, with retailers in several countries spreading them across what’s often called “Black Week.”

Broadcasters in South Africa showed people waiting in line to shop in one of the world’s most socially and economically unequal nations. The Mail & Guardian newspaper claimed in a scathing editorial how Black Friday is used to enrich big retailers.

“Like no other day, this Friday shows how broken the world we have built is,” it said.

Black Friday has meanwhile had to adapt to cultural norms.

Egyptians, for example, have taken on all aspects of the occasion except the name, because Friday is a sacred day of worship for Muslims. Rather than scrap the event, many retailers decided to rename it White Friday or Yellow Friday. 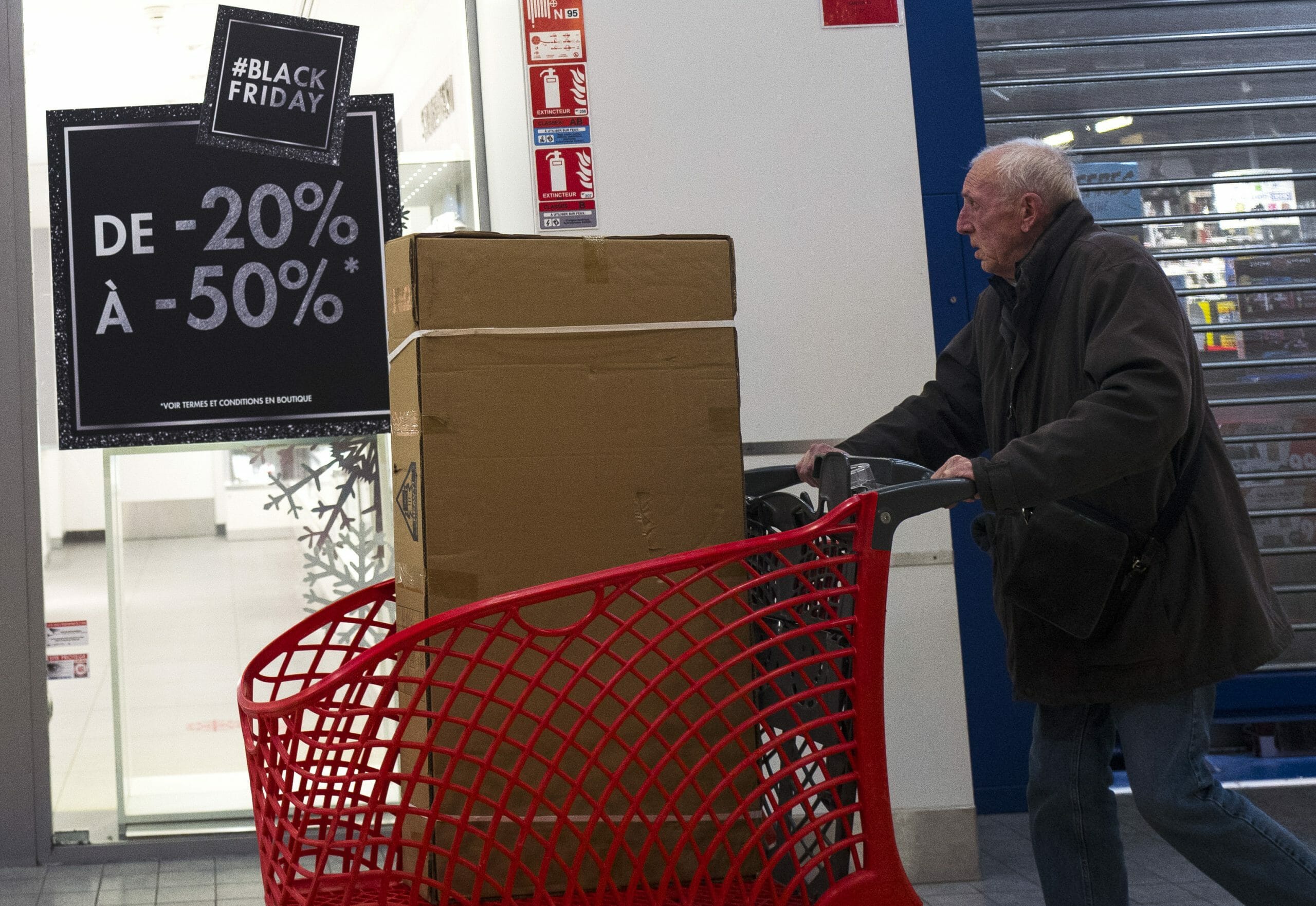 A shopper is seen during the opening of an Auchan general store, on Black Friday, Nov 29, 2019, in Englos, northern France. (Michel Spingler / AP Photo)

The term Black Friday comes from retailers’ claim that it was the day when they went from losing money for the year — in the red — to making a profit — in the black.

Among other concerns is that Black Friday could hurt small businesses that do not have the vast marketing budgets and online sales presence of big retail chains or multinationals.

In Italy, for example, Black Friday falls outside the season’s strictly defined schedule for when the winter shop sales can be held. This year, sales cannot be held from Dec. 5 until Jan. 4, when stores are allowed to clear out stock. The fashion industry has warned that can hurt smaller retailers in a country that relies heavily on them. 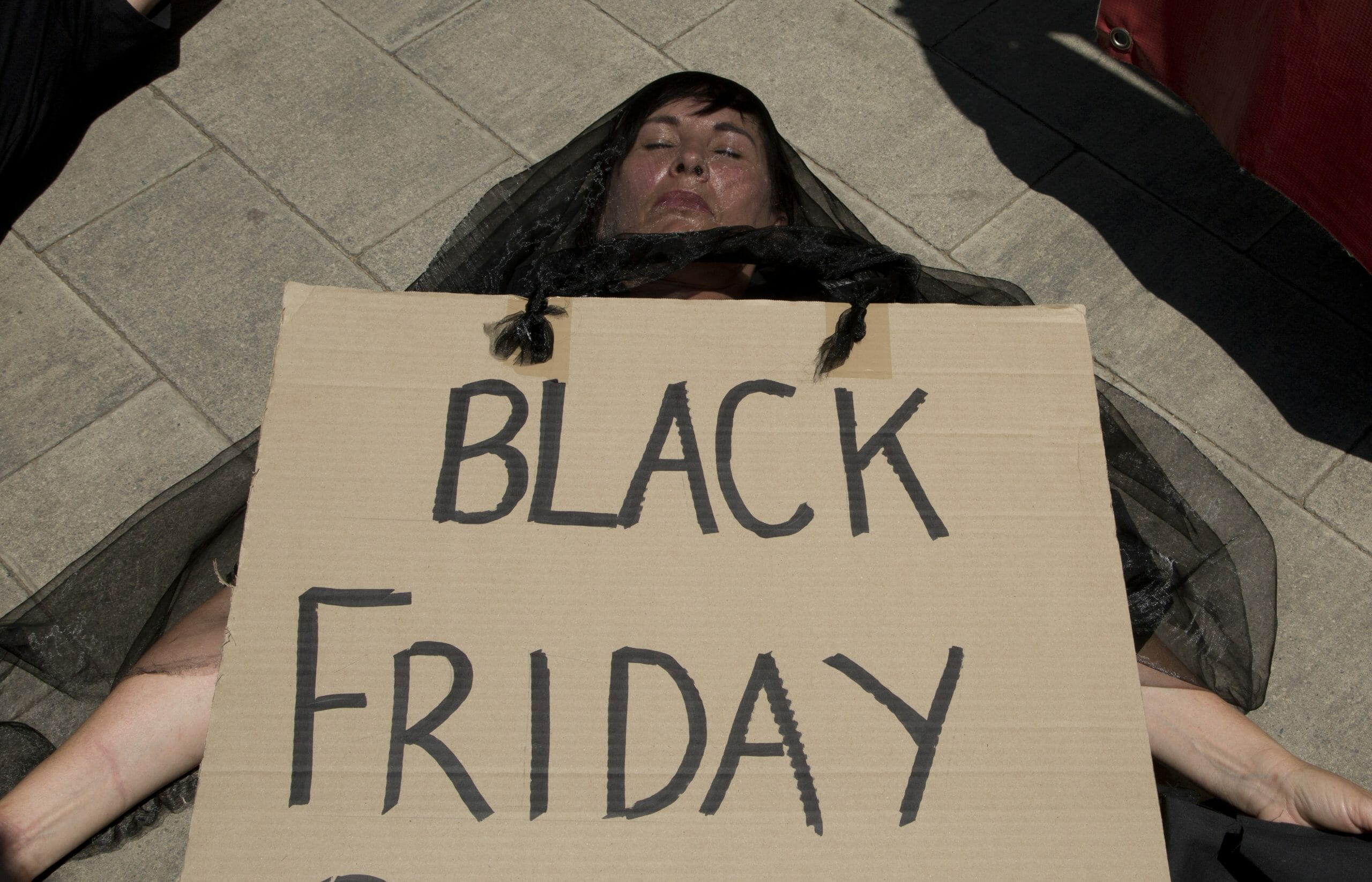 Dozens of French activists predictably blocked the Amazon warehouse in Bretigny-sur Orge on Thursday, spreading hay and old refrigerators and microwaves on the driveway.

On Friday, climate activists took aim at Black Friday, blocking shops and setting up heated exchanges with the people who had been hoping to find a good deal.

“We need to stop telling ourselves that, ‘it’s Christmas, I need to go shopping,’” says Théophile Pouillot-Chévara, a 17-year-old self-described “climate activist” in Paris.