Early adopters recently started receiving their new Apple AirTags, which Apple advertises as an easy and convenient way to track small items that are easily lost. Simply pair an AirTag — which is slightly larger than a half-dollar coin — with an Apple device, attach it to anything and the user will be able to see its real-time location anywhere in the world.

As The Washington Post reported, “AirTags are a new means of inexpensive, effective stalking.” Apple’s own website states that “You‘ll see the distance to your AirTag and the direction to head in — all thanks to Ultra Wideband technology.” The “Find My” feature is available on all iPhones, iPads and — thanks to the cloud — any web browser. It allows you to see where a particular AirTag is located on a high-resolution map.

Getting an Assist from ‘Hundreds of Millions of Friends’

If an AirTag is moved outside of the user’s iPhone’s range, Apple states that the “hundreds of millions of iPhone, iPad, and Mac devices around the world — helps track down your AirTag.”

Essentially, whenever an Apple device comes near, the AirTag sends out a ping that the Apple device receives then forwards as location data to Apple’s servers. That way, whoever sets up the AirTag can keep track of its location, despite being a few feet or thousands of miles away.

Apple highlights its dedication to privacy by stating that “location data and history are never stored on the AirTag itself” and that “devices that relay the location of your AirTag also stay anonymous, and that location data is encrypted every step of the way.”

That may be true, but these efforts really just protect Apple, any wandering devices and, most importantly, the owner of the AirTag, who can always see its location. Anyone who puts an AirTag anywhere in the world should be able to find it thanks to the 1.65 billion Apple devices roaming around, continually pinging its location back to Apple.

Apple Pulls from Playbook in its Response to Stalking Fears 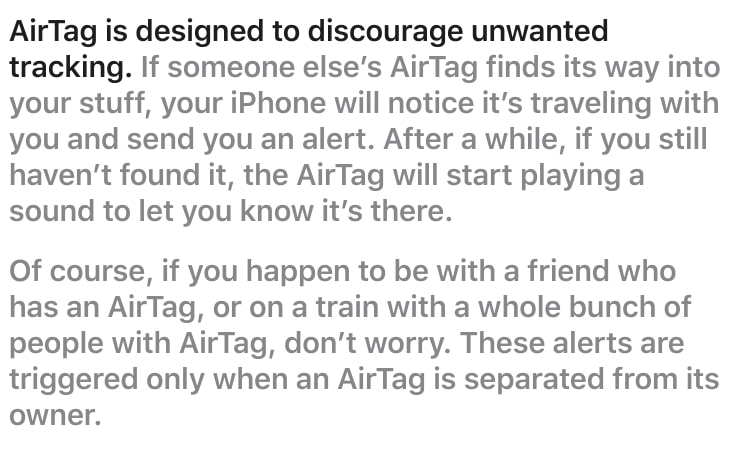 Essentially, if you own an iPhone, you should be okay.

If someone places an unwanted AirTag around you and leaves, you will get a notification on your iPhone stating an “AirTag Detected Near You.” You can press a button on the message to have the AirTag play a sound so you can find it. It is then a simple matter of unscrewing the case and removing the battery.

At the bottom of a support page, Apple helpfully states that if you find an AirTag and “feel your safety is at risk, contact your local law enforcement who can work with Apple.”

Apple does not disclose how close the AirTag has to be for the iPhone to detect it or whether any sort of barriers prevents its signal from being located. If it was placed in the trunk of a car, would the iPhone notice it? The jury seems to be out.

What About Those Outside of Apple’s Walled Garden?

The above notification only works if you have an Apple device. Android users — and indeed, the billions of people without an Apple device — will receive no such message. However, once a person plants an AirTag, the clock starts ticking. After three days, if the AirTag does not see the device it is paired with, it goes into “lost mode” and begins beeping. A victim of stalking then may be able to hear and find the AirTag.

However, that may not be of much use. Videos have already popped up showing how easy it is to disable the tiny speaker.

Bringing Complex Technologies to the Masses

Apple has always done a tremendous job taking complex technology and producing easy-to-use products “for the rest of us.” From the first commercially successful computer with a mouse, to the iPod and now iPhone, Apple has a knack for packing loads of computing power into easy-to-use, attractive packages. The AirTag is no different.

Tracking units that utilize GPS have been available for a long time, but they have been expensive and complex to set up. There are also companies like Tile, which offer similar products, but are limited by the range of their Bluetooth transmitter.

Both lack Apple’s secret sauce — the 1.65 billion devices to aid in the tracking.

Unfortunately, what Apple has done with its new AirTags is streamline the stalking process for bad actors. It has not nearly done well enough to protect unsuspecting victims.