This article was sponsored by “The Faith of Mike Pence.”

Former Arkansas Gov. Mike Huckabee lauded Vice President Mike Pence as the “real deal” who seeks to live as an authentic man of God in both his public and private life.

In the forward to the newly released book “The Faith of Mike Pence” by Leslie Montgomery, Huckabee recounted that he has known Pence for nearly 25 years.

“Mike Pence is not a politician who wears his faith on his sleeve. He wears it on his heart and soul. He is a man who seeks and desires to do God’s will in every area of his life,” he wrote. 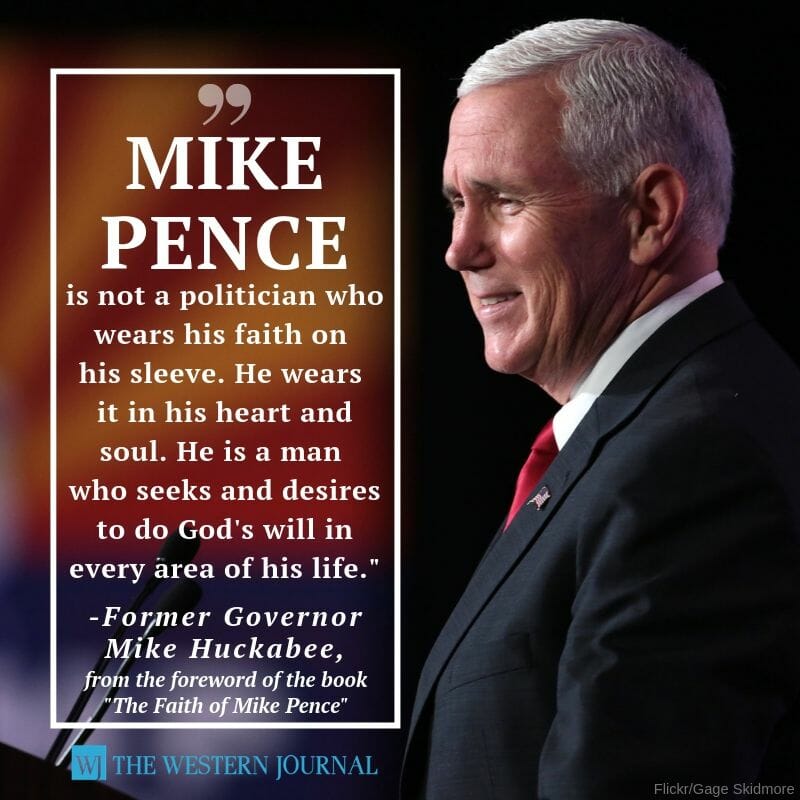 The former presidential candidate argued that Pence’s heart for God is evident in his pro-life stance and his advocacy for Israel, among other policy positions he has taken.

“You never have to question where he stands on an issue because it’s always from a biblical worldview,” Huckabee wrote.

In a recent “After The Show” interview with Montgomery on TBN’s “Huckabee,” the host said, “Vice President is the real deal,” to which the author agreed.

“I ended up doing two-and-a-half years of research and almost 60 interviews, and I walked away from writing this book inspired, encouraged and challenged in my faith,” Montgomery said.

“It’s a comeback story, not just personally and politically, but spiritually.”

Montgomery explained in an interview with The Western Journal that Pence experienced a defining moment early in his career when he lost a bitterly fought congressional race in 1990.

The future congressman, Indiana governor, and now vice president spent the rest of the decade in the political wildness, but she contends that is when God did some real work in Pence’s life.

“The reason why I love it is because of Romans 8:28,” Montgomery said.

The popular Bible verse reads: “And we know that for those who love God all things work together for good, for those who are called according to his purpose.”

Montgomery believes Pence came out of that season a humbler man, more committed to doing God’s will, God’s way.

She told Huckabee two of the greatest takeaways from her study of Pence are “how humble he is” and “what a servant’s heart he has.”

“The people that I interviewed for this book were Democrats and Republicans, down the middle, advocates of LGBT,” she said. “They were pro-choice, and everybody said the exact same thing about him: He’s a man of God, and he’s a man of integrity.”

Huckabee responded, “How can you be an enemy of the vice president? He’s one of the genuinely decent people I think I’ve ever been around and certainly in politics.”

Huckabee believes both fellow Christian believers and skeptics of the vice president will be encouraged by “The Faith of Mike Pence.”

He explained in the book’s foreword, “Within these pages, Leslie Montgomery has painted an exquisite picture of the real Mike Pence that is seldom reported upon by media.”

Read reviews of this fascinating new book and order your copy today of “The Faith of Mike Pence” by clicking here.

Sponsored Content
This content was developed by The Western Journal's creative studio in collaboration with one of our trusted partners.
Divine Judgment: Did You Notice What Happened 1 Year to the Day Before the COVID Plague Struck NYC?
If You Plug the Dates for 9/11 and COVID Into the Bible, Some Absolutely Chilling Numbers Show Up - Is the End Near?
Look What People Reading the '1 Year Bible' All Saw on Sept. 11, 2001, Right Before the Planes Hit
Epic: Conservative Wireless Provider Decides to Give Libs Taste of Their Own Medicine, Helps Flip 4 Woke School Boards
End Times? Obama Wrote 8 Words at Top of Freedom Tower, May Have Fulfilled Horrifying Bible Prophecy
See more...
Advertisement

A new wave of predictions shows many experts are expecting that a recession is coming to Joe Biden's America.
By Jack Davis  September 25, 2022

It was not a great moment for Nancy Pelosi. And for it to happen in the liberal bastion of Manhattan was the biggest surprise of all.
By Elizabeth Stauffer  September 25, 2022

A massive fire took place at a Paris food market Sunday. The fire produced a cloud of smoke so large it blotted out the sun.
By Michael Austin  September 25, 2022

A Connecticut state trooper became a distressed veteran's guardian angel when he encountered the man on an interstate highway.
By Richard Moorhead  September 25, 2022

Amid rumors of a coup in China involving President Xi Jinping, one expert said something is stirring in Chinese politics.
By Jack Davis  September 25, 2022

Hillary Clinton put her hypocrisy on display during an interview that aimed to slam Trump supporters, but exposed the left instead.
By Matthew Holloway  September 25, 2022

Those who fear God cannot compromise with anti-biblical woke ideology and the quasi-religious tenets of radical liberalism.
By Ben Kerido  September 24, 2022
Next