The left is currently struck with apoplexy over the fact that in his interview this weekend with Fox News’ Chris Wallace, President Donald Trump didn’t necessarily commit to accepting the results of this November’s election, particularly if he thinks there are irregularities from national mail-in voting.

This reaction is curious inasmuch as there are wide swaths of the American left that’ll never accept the results of the 2016 election.

More curiously, there were others on the left who heard this answer and immediately leaped to febrile nightmares of Trump refusing to leave the White House, apparently hunkered down behind a wall of sandbags in the Oval Office with some RPG launchers, a year’s worth of MREs and his pen and phone so he could keep signing executive orders.

One of the people entertaining these thoughts was House Speaker Nancy Pelosi, who may or may not have been joking when she said Trump may need to be gassed out of 1600 Pennsylvania.

“There is a process. It has nothing to do with if the certain occupant of the White House doesn’t feel like moving and has to be fumigated out of there because the presidency is the presidency,” Pelosi told MSNBC.

“Whether he knows it yet or not, he will be leaving,” Speaker Pelosi says after President Trump suggests the possibility of not accepting the election results. pic.twitter.com/Xu1PiyfaV3

If Pelosi didn’t exactly sound jocund during the interview, she also didn’t sound like she was particularly serious because if Trump loses, Trump’s leaving.

Unless there’s an extreme case where there are some serious, provable irregularities in voting and this is taken up by the Supreme Court — which is profoundly unlikely — whether or not Trump wants to accept the results will have no effect on the transition of power.

Of course, Pelosi might try to fumigate Trump out if he wins, but that’s a topic for another day.

Anyhow, there’s a reason why Nancy Pelosi is the head of the Democratic Caucus in the House of Representatives and Cenk Uygur only managed 6.5 percent of the vote in a California jungle primary for a House of Representatives seat after a disastrous candidacy best remembered for an unearthed clip in which he proposed legalizing certain forms of bestiality.

I’m going to assume, aside from nauseating policy positions, it has to deal with their respective grasps on reality.

Aside from his failed candidacy, Uygur is best known as the impresario behind “The Young Turks,” a YouTube show that focuses on progressive politics.

If you’ve seen it and forget which one he is, he’s the guy who resembles nothing so much as a linebacker who’s one espresso over the legal limit. Anyhow, Uygur watched the Wallace interview and was also alarmed.

His response was slightly different than Pelosi’s: He wanted to gather an internet posse to march up to the White House and physically remove Donald Trump from the premises should he lose.

WARNING: The following tweet contains graphic language that some viewers will find offensive.

When asked if he would leave office if he lost the election, @realDonaldTrump answered, “It depends.” No, it most certainly does not depend. You’ll leave, you fucking goon. At that point, if US military does not physically remove you from the building, the American people will.

“When asked if he would leave office if he lost the election, @realDonaldTrump answered, ‘It depends.’ No, it most certainly does not depend. You’ll leave, you f—ing goon,” Uygur tweeted. “At that point, if US military does not physically remove you from the building, the American people will.”

First, this tweet is factually inaccurate. When Trump said, “it depends,” it was in response to a question about whether he was gracious or not.

In terms of accepting the results of the election, no, he didn’t commit to that. He said nothing about whether that would have anything to do with him leaving office — if only because it wouldn’t make any difference no matter how he felt.

Cenk playing fast and loose with the facts in a tweet wouldn’t normally be of any import, if just because this is what he does for a living. The thing is, Uygur has reached that rare point where a pundit actually begins to take their off-the-cuff, fact-free claptrap seriously.

Sign Petition: If Donald Trump loses the election and refuses to leave, and the United States military does not remove him from office, I, the undersigned, will personally go to Washington and help remove him from the White House with my fellow Americans. https://t.co/sBmpyfXrWl

That’s his plan. Not only does he believe his own lie about what Trump said, he started a petition to get people to pledge to make sure Donald Trump is physically prevented from doing what Cenk Uygur erroneously claims Donald Trump says he might do. To this effect, a YouTube host is going to start a volunteer army to take on the military, Secret Service, Trump’s loyalists and the president himself.

And this is apparently a real petition — or at least a really good excuse to get your personal data so The Young Turks can sell it to advertisers: 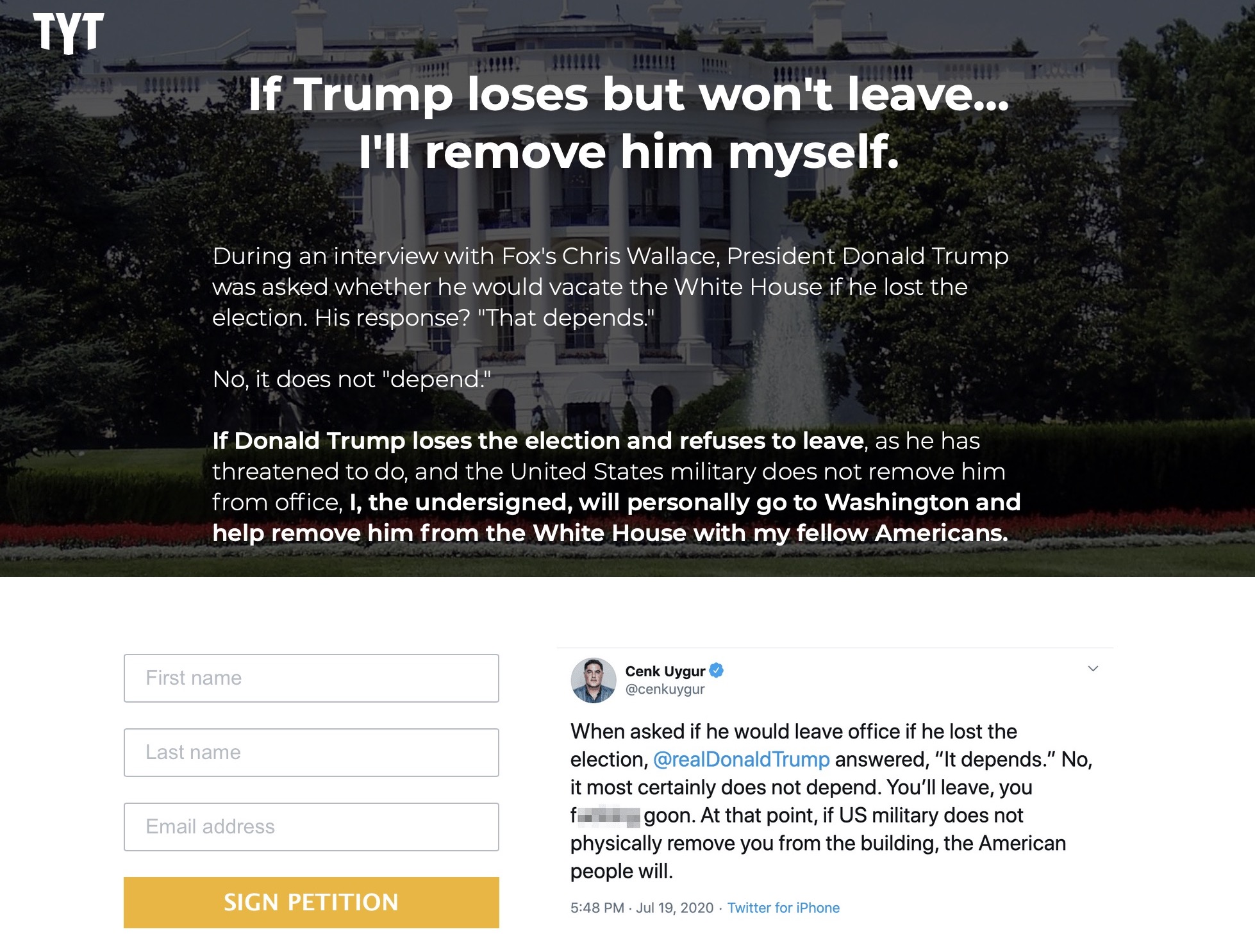 “If Trump loses but won’t leave… I’ll remove him myself.” I’m getting this mental image of Cenk Uygur taking on the entire Trump administration and the military like in one of those old Sega Genesis brawler video games, where a single musclebound guy could knock out 6,273 toughs and regain his health by eating turkeys he found in convenient spots on the ground.

There’s nothing stopping Cenk Uygur from trying this right now, actually, before any election happens. I’d pay to see this.

I’m 60+ years old, have 2 herniated disks, and I am quite overweight, but I will get there on my hands and knees if I have to pull his sorry a$$ from the office.

If I remember, all of those Sega Genesis brawler heroes had to have some sidekicks. In Cenk’s case, it’s an overweight sexagenarian and a woman with ammunition who probably can’t actually hit anything. This isn’t the best video game pitch you could come up with, but Donald Trump as the final boss should probably wallpaper over some of those problems.

There were other posters willing to point out the absurdities of Uygur’s petition:

If trump loses (he won’t), I hope he accepts defeat like the dems and hillary did in 2016

Or to point to Cenk’s infamous meltdown during The Young Turks’ livestream during election night 2016:

We look forward to your election meltdown sequel, Cenk.

Cenk, I cannot wait for another election night loss highlight reel from you. Everytime I am down the mere pleasure of watching you lose your ? is a instant pick me up.

Thank you sir for all the joy your misery brings.

Well, the good news is you don’t have to wait for election night for Cenk’s meltdown. He seems to be having it right now.