Double standards from the establishment media are nothing new, especially when it comes to conservative women.

While liberal women are exalted, believed and honored, those with conservative views are either mocked or ignored.

As usual, one aspect of the media’s criticism was a topic that would be off-limits for liberal women but is welcome for conservatives — their looks.

Noticeably, hair color is not a topic for derision of anyone on the left. Liberal blondes are left alone.

Rudnick’s tweet was deleted, but not before being retweeted by multiple media figures, including Washington Post TV critic Hank Stuever and Vanity Fair correspondent and NBC News contributor Gabriel Sherman. 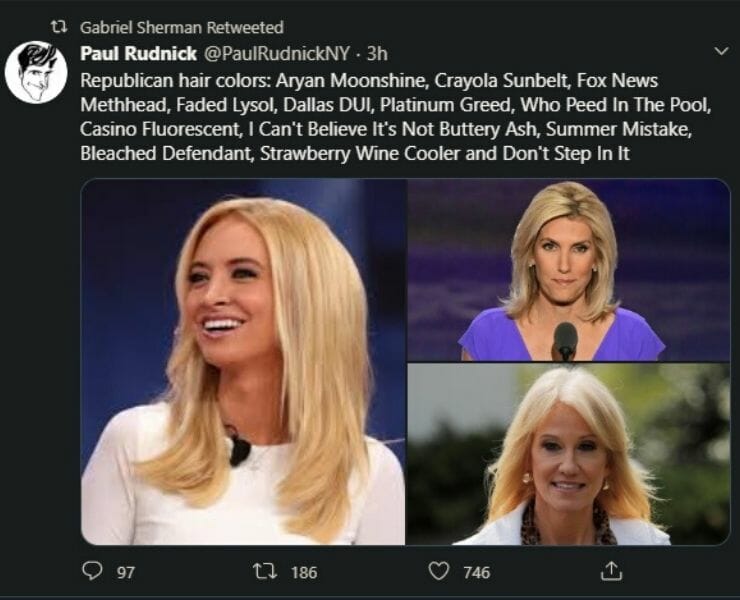 Particularly noteworthy is the retweet from Sherman, who made a name for himself with his reporting on sexual harassment.

He was the author of “The Loudest Voice in the Room,” a 2014 biography of former Fox News President Roger Ailes that included an allegation of harassment from a television producer.

When former Fox News anchor Gretchen Carlson filed a harassment lawsuit against Ailes in 2016, Sherman jumped at the opportunity to cover the story, reaching out to sources he had cultivated in writing the biography and doggedly reporting on the alleged culture of sexism at the network.

This resulted in Sherman being ahead of the curve in media coverage of Ailes, for which he was widely praised.

“Other news organizations, including The Washington Post and the New York Times, have done strong work on this story, but Sherman has owned it,” The Post’s Margaret Sullivan wrote in August 2016.

Yet, this champion of female dignity was happy to share snarky, sexist comments about conservative women.

One could even suspect that Sherman’s aggressive coverage of the Ailes story had less to do with protecting women and more to do with a desire to denigrate Fox News.

In 2016, he told Sullivan he was optimistic that his coverage would spark change within the Fox organization.

Sherman expressed hope that “enough questions have been raised that if the Murdochs really want to change the culture, they will clean house.”

Perhaps enough questions were raised for a change of culture within Fox News.

However, as his retweet showed, the culture at large is still unconcerned with sexism directed at conservative women.