Conservative talk show host Rush Limbaugh unequivocally stated recently that Republicans will win in November despite what the polls might be saying.

Dee from Des Moines, Iowa, called into his show May 21 and expressed concern about the close Senate race in Iowa. She asked the radio legend for his take on the matchup between incumbent Republican Sen. Joni Ernst and likely Democratic challenger Theresa Greenfield.

The race has tightened, as The Hill reported, and one recent poll shows that Ernst leads by just a single percentage point.

Limbaugh said he isn’t worried. In fact, he purposefully ignores stories about how Senate Republicans or President Donald Trump are going to lose in November because he doesn’t think they are accurate.

Limbaugh went on to explain why he does not put any stock in polls.

“The things that are going to [determine] the outcome of the election in November haven’t even happened yet.”

And he does have a point.

In 2016, every major poll had Democrat presidential nominee Hillary Clinton winning by a wide margin over Trump.

The day before the 2016 election, Reuters published the results of it’s final pre-election poll, which gave Clinton a 90 percent chance of winning the presidency.

The Reuters/Ipsos States of the Nation nation didn’t have the race close, and the outlet reported at the time that the only way Trump could win was through the “unlikely combination of turnouts of white, black and Hispanic voters in six or seven states.”

Well, we know how that turned out.

RELATED: Rush Issues Dire Prediction: 2022 Isn't Going to Save Us, 'Wake the Hell Up'

In the final weeks of that legendary race, an ABC News reported Clinton had a double-digit lead nationwide.

Remind me, if you will: What was the final electoral vote tally?

A similar tone is now being set with current polls.

Many are already giving the White House to the presumptive Democratic challenger Joe Biden, even though the election is six months away, based on polling results.

But as we saw four years ago, polling is not necessarily a good indicator of who will actually win. If it were, Hillary Clinton would be in the White House.

What matters are the people who actually go out and cast a vote.

Plus, as Limbaugh pointed out, a lot can happen between now and November.

America is already starting to reopen, and if Trump can get the economy back on track, that would likely inspire plenty of Americans to vote for him again.

In fact, some top Democrats are apparently quite concerned that an economic comeback could serve as a boost for Trump’s re-election bid while hurting Biden, according to one report.

And if Trump is able to resume his enormous rallies later this year, he could energize his base. Democrats are no doubt afraid that this might happen.

“I’m not a political professional strategist, analyst in that regard. I don’t get caught up in polling data minutia and think tank position papers and all this, ’cause nobody knows,” Limbaugh said.

Limbaugh noted that Americans are not ready to throw away the Constitution, guns, churches and liberties to put a Democrat in the White House.

He’s confident the polls will once again be wrong, and that the combination of voters who turned out for Trump four years ago will show up and vote for him again. 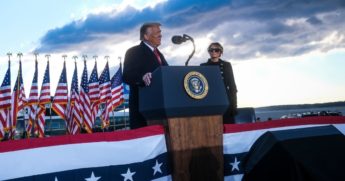