The latest batch of Hillary Clinton’s emails was just released, and it proves she knew exactly what she was doing when she sent classified information over a private email server.

Those 78 pages of emails were released by the conservative watchdog group Judicial Watch on Friday.

And there was plenty of proof that Clinton had been “extremely careless” with national secrets, as former FBI Director James Comey described it (in the watered-down version approved by a Clinton supporter in the FBI).

According to Judicial Watch, for instance, on Aug. 24, 2010, Clinton emailed an aide, Justin Cooper, asking him to print classified information, though Cooper had no security clearance to do so.

In a June 6, 2011, email, Cooper even warned about security issues with the emails and Clinton’s personal cellular devices, according to Fox News.

“We also have some new security features and policies [sic] that I would like to add to any new berry you have –the most noticeable difference will require a more complex password,” Cooper wrote. “It is a constant fight to keep up with the security measures and unfortunately we keep seeing reminders of why we need to.”

So, even Clinton’s own aides were reminding her of the security issues at stake and she remained oblivious — or utterly uncaring. Obviously, security was not a high priority for the then-secretary of state.

In other emails, they discussed backup emails, how to set up Clinton’s Blackberrys and iPads and other internal information

Judicial Watch President Tom Fitton said the newest batch of information proves what Hillary supporters refuse to accept — and what earlier investigations did not get to the bottom of: The proverbial smoking gun.

“The fact that Hillary Clinton and her agents tried to destroy or hide emails shows how she flagrantly and knowingly violated the laws that protect classified information and government records,” Fitton wrote in a Judical Watch news release.

“And these new emails refute Hillary Clinton’s repeated claims of having little or no knowledge about her email system. She clearly was fully in charge of setting up her outlaw email system and overseeing its use.”

You’ll remember, on July 2, 2016, Clinton was interviewed by the FBI about her use of those private email servers. Clinton told the agents she “could not recall” any briefing or training about the retention of records or handling classified information, according to CNN.

Is there anyone in America — even Hillary Clinton supporters — who thinks that’s true?

RELATED: Lin Wood Blasted for Using Rhetoric That Could Cost the GOP the Senate

Additionally, according to The Associated Press, in a separate, sworn court filing, Clinton said 21 times that she “did not recall” ever sending classified information over that private server. The emails Judicial Watch released on Friday prove that she did.

As special counsel Robert Mueller’s investigation has reminded the country, lying to the FBI is a crime — at least when it’s done by Donald Trump Associates.

The last time we checked, lying under oath is perjury. In a federal case, it carries sentence is up to five years in jail — at least when it’s done by someone who’s not named “Clinton.”

It was clear two years ago and it’s clear now: Hillary Clinton has done more than enough to belong behind bars.

What do you think about this new batch of emails? Scroll down to comment below.

Rules for Thee Not for Me: Chicago Mayor's Security Team Gets Traffic Fines Dismissed 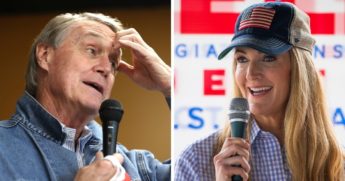