Beef: It’s what’s not for dinner at a top website for recipes, because we’re in a climate crisis, and are you some kind of denier, sir? How dare you?

In perhaps the most laughable bit of climate virtue-signaling you’d have seen last week or any other, Epicurious announced it was no longer going to feature new recipes featuring anything from our friend the cow because they’ve “cut out beef.”

“For any person — or publication — wanting to envision a more sustainable way to cook, cutting out beef is a worthwhile first step,” Epicurious’ David Tamarkin and Maggie Hoffman wrote in an April 26 piece.

“Almost 15 percent of greenhouse gas emissions globally come from livestock (and everything involved in raising it); 61 percent of those emissions can be traced back to beef. Cows are 20 times less efficient to raise than beans and roughly three times less efficient than poultry and pork. It might not feel like much, but cutting out just a single ingredient –beef –can have an outsize impact on making a person’s cooking more environmentally friendly.”

“Today Epicurious announces that we’ve done just that: We’ve cut out beef. Beef won’t appear in new Epicurious recipes, articles, or newsletters. It will not show up on our homepage. It will be absent from our Instagram feed,” the announcement continued.

“We know that some people might assume that this decision signals some sort of vendetta against cows — or the people who eat them. But this decision was not made because we hate hamburgers (we don’t!). Instead, our shift is solely about sustainability, about not giving airtime to one of the world’s worst climate offenders. We think of this decision as not anti-beef but rather pro-planet.”

Just in case you need to know where they’re coming from, Epicurious is a Condé Nast publication; the same fine people who are behind, among other outlets, Teen Vogue. (Sample Teen Vogue headlines from the past year: “Karen Is Being Used by White Women — Here’s Why They Need to Stop,” “Black Power Naps Is Addressing Systemic Racism in Sleep” and “How Ableism Can Manifest in Fandom — and How to End It.”)

So, yes, Condé Nast publications are known to tilt this way anyhow. Strangely, this doesn’t appear to be a new decision, just an announcement of it: The article stated that “we actually pulled the plug on beef well over a year ago, and our readers have rallied around the recipes we published in beef’s place,” with other alternatives in its place.

“The traffic and engagement numbers on these stories don’t lie: When given an alternative to beef, American cooks get hungry.”

However, they said they announced the decision now because beef consumption in the United States “has been slowly creeping up in the past few years. The conversation about sustainable cooking clearly needs to be louder; this policy is our contribution to that conversation.”

If this explanation seems malodorous to you, I assure you that you’re not alone. However, even if you’re to take them at their word, I can assure you that Epicurious has no interest in making substantive moves to reduce carbon emission. Just take a look at their home page as of Sunday: 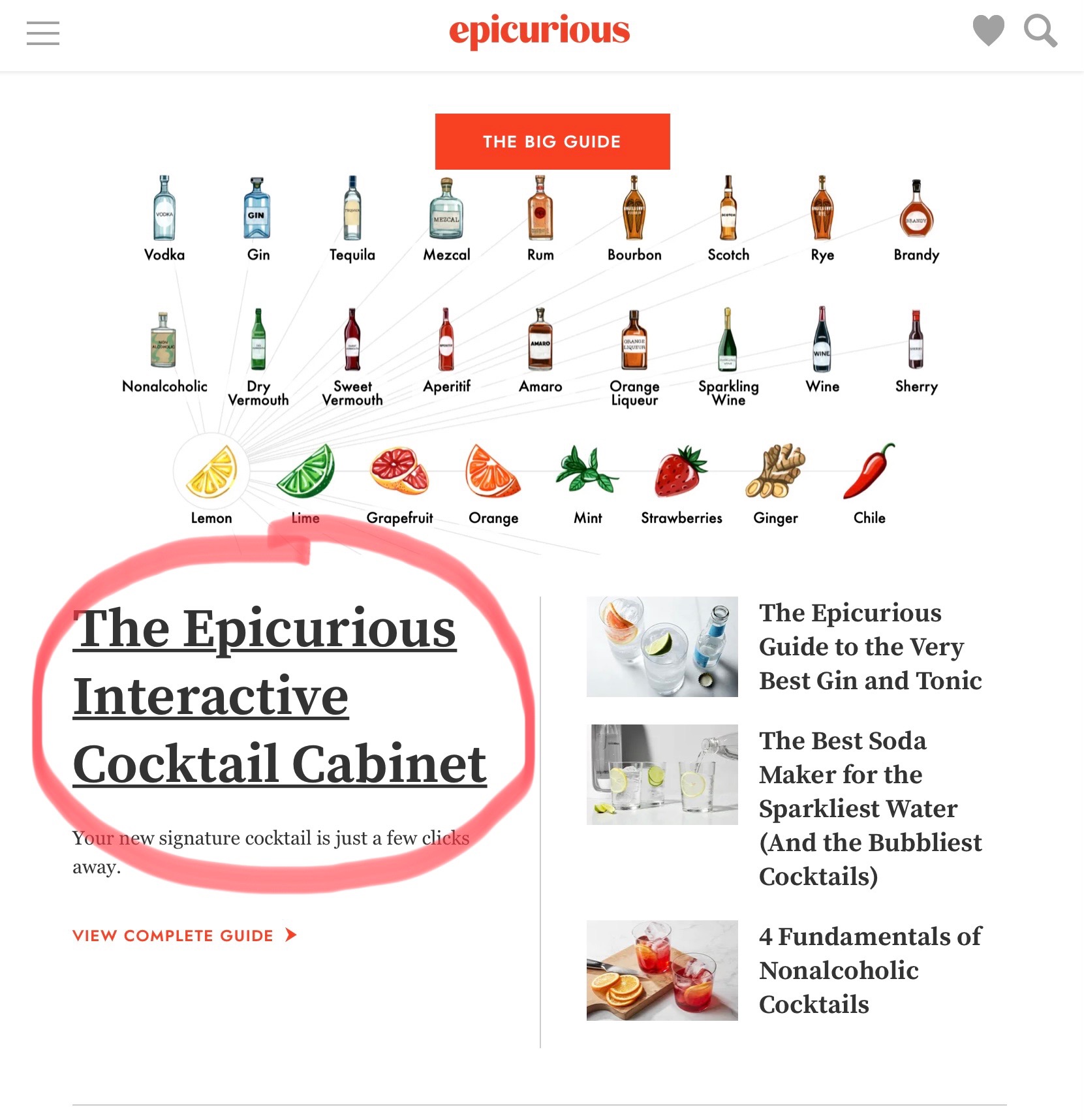 Alcohol is terrible if you think we’re in a climate crisis — and, unlike beef, there’s no nutritive value to it. It’s arguably the most superfluous foodstuff there is unless you’re physically addicted to the substance — and my guess is, at that point, you’re not really consulting Epicurious for their guide to “the very best gin and tonic.” (Horribly overrated drink, by the way, even if you add a bit of Angostura Bitters.)

Here’s Tom Cumberlege, associate director for corporate carbon measuring company Carbon Trust, talking to Vice for a 2018 article: “The first place to look when considering the environmental impact for different types of alcohol are the impacts related to farming the main ingredients: barley for beer, grapes for wine, sugarcane for rum, apples for cider, agave for tequila, and so on.

“These will typically include fertiliser use, water use and any irrigation requirements; any potential biodiversity impact from deforestation to create new agricultural land; and the efficiency of harvesting, processing and transportation.”

“After this, you then need to look into the drinks manufacturing process. For example, the brewing of beer and the distilling of spirits both require quite large amounts of energy, particularly for heat,” he added. This isn’t even to mention transportation, refrigeration and packaging.

And wait — it gets worse, since Epicurious’s guide is focused on cocktails, which use high alcohol-by-volume spirits.

“As a rule of thumb, the higher the alcoholic content of a drink, the higher the carbon footprint per litre — so beer is lower than wine, which is lower than spirits,” Cumbridge said. “There are also some very specific waste issues associated with making certain types of alcohol. For example, with tequila production, when you pulp an agave plant you get quite a lot of waste, called vinazas, which is acidic and can contaminate soil and water tables when disposed of improperly.”

Compared to beef, alcohol has no dietary benefit for those who consume it. In fact, in most cases, consumption of it is considered deleterious to your health — and I’ve never seen anyone on the sidewalk outside of an Outback Steakhouse after being kicked out for having one too many bites of prime rib telling the bouncers he was “just trying to have a good time.” Any pollution caused by alcohol, then, is by definition surplus pollution. Why not stop running features on booze, then?

Presumably because, when given zesty recipes for mint-and-cucumber water as an alternative to hooch, American drinkers don’t get thirsty.

Between Rep. Alexandria Ocasio-Cortez’s “farting cows” and Bill Gates’ calls for us to switch over to synthetic beef, there’s been plenty of fatuousness around blaming the humble bovine for climate change. Epicurious’ might take the vegan cake, though, if just because of the blatant hypocrisy. Beef may be part of your diet — part of your culture, even — but at the very least, they’re giving you the side-eye for eating it. Here, have a drink, though; maybe you’ll feel better about the veggie burgers your host is serving at the socially distanced barbecue once you get two or three tequilas in you.

Thankfully, you don’t need a recipe to cook a steak.

Missouri Attorney General Andrew Bailey is taking a stand against woke educators who brought students to a drag show.
By Isa Cox  February 2, 2023