Twitter censored an inspirational post by former NFL quarterback Tim Tebow asking Christians to hold onto their faith during times of personal tribulation.

The former Heisman Trophy winner tweeted a simple message Tuesday: Keep your faith intact, and remember that all of the Bible’s messengers struggled.

“This could be your time. That breakthrough could be tomorrow, or it could be next year. But, you have the opportunity to turn however you’re being tested into a testimony. So many heroes were wounded deeply before they were used greatly!” he wrote, alongside a video message.

“The following media includes potentially sensitive content,” read a warning from the social media giant that covered the video portion of his post. 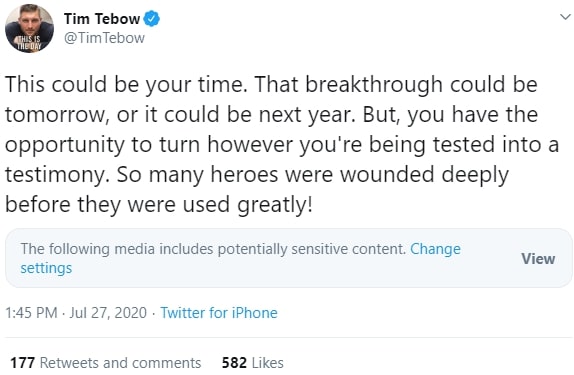 The Western Journal reached out to Twitter for comment about why the video post was labeled with a warning but did not immediately receive a response.

It’s difficult to discern what anyone could find “sensitive” about the content in Tebow’s video.

In the post, Tebow, breathing heavily after an apparent workout, called on Christians to turn to God during times of difficulty.

This could be your time. That breakthrough could be tomorrow, or it could be next year. But, you have the opportunity to turn however you’re being tested into a testimony. So many heroes were wounded deeply before they were used greatly! pic.twitter.com/ldTu5acIDO

“Bible believers, when we look at the Bible, and we see a lot of the heroes, a lot of times they truly were wounded deeply before they were ever used greatly,” he said.

“Because you never know what God is doing with your life. You never know what he is preparing you for. So many times in the Bible, when we look at the heroes, there were times in their life where if they stopped, if they quit, if they said, ‘No, God, I’ve had enough,’ then they would have missed out on the most impactful, most influential times of their life,” the former Florida Gator said.

Tebow then appealed to those who might be struggling.

“Because maybe that breakthrough is coming tomorrow. Maybe it’s next year. Maybe you have a little bit more time going through a hard time in your life.

Sadly this tweet is now unviewable saying it is sensitive media. ?‍♀️?‍♀️

“But I can tell you this: We get to trust an unknown future to a known God, because we know how much he loves us. We know what he did for us in sending his son. He gave his best for us. …

“When we remember that, then we can have trust in the character of our God, because we know how much he loves us. That’s how we get through the tough times.

Tebow concluded his video message by saying, “Right where you’re at, whatever you’re doing, whatever you’re going through, he loves you. You were enough for his son to die on the cross, that’s how much you’re loved. Hold onto that in your time of need.”