The tweet in question came in response to a clip from Obama’s speech at the University of Illinois, Urbana-Champaign on Friday when he said, “We’re supposed to stand up to discrimination, and we’re sure as heck supposed to stand up clearly and unequivocally to Nazi sympathizers.”

He then asked, “How hard can that be, saying that Nazis are bad?”

O’Neill was referencing Obama’s reticence during his time in office to say that the United States was engaged in a fight against radical Islamic terrorism.

A Twitter account named Secret Society Alumnus responded to O’Neill’s tweet, writing, “He kinda killed Osama Bin Laden, so…,” as if to say Obama may not have been willing to say “radical Islamic terrorist,” but he took action against it.

O’Neill replied, “Do you know who you’re talking to?”

Do you know who you’re talking to? https://t.co/EH2ewczzQv

Paronto then jumped into the conversation, tweeting, “OMG ??!! Did you just tell the guy who Shot Bin Laden that @BarackObama did it?? BWAHAHAHA. Thank you for verifying that BHusseinObama worship and (Trump Derangement Syndrome) causes liberalists to skip retard and go straight to potato. #YouAreAnIdiot #NeverGoFullRetard”

Paronto was back up and running by Sunday and tweeted, “After being in the @Twitter penalty box for a few and having to delete the tweet below for offending the leftist hate group @itmustend_ for their epic fail of telling Rob O’Neill that BHusseinObama killed UBL and not him, I’m back up…sooo Twitter doesn’t censor ehh @jack.” 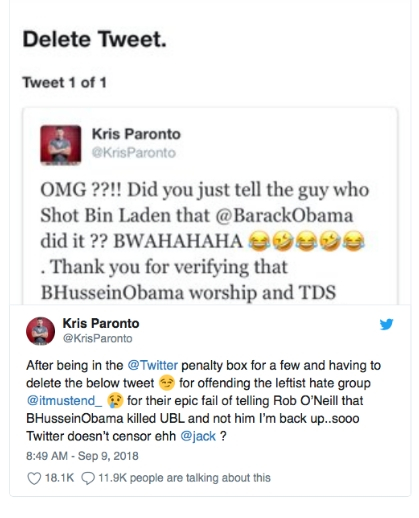 Paronto tagged Twitter CEO Jack Dorsey in the tweet, who had just testified before Congress last week about the social media company’s efforts to remain an impartial platform for sharing political views.

Related:
Dilbert Being Cancelled - Pro-Trump Scott Adams Says Strip Has Been Axed by Papers Across America

In an Instagram post, Paronto wrote about his suspension, “Yes boys and girls …. and leftists, we have the right to free speech but only if it fits the leftists narrative, doesn’t show their stupidity and ignorance and most importantly doesn’t hurt their fragile little egos.”

On being reinstated on Twitter, Paronto got into a back and forth with former talk show host Montel Williams.

Paronto had first tweeted, “So this is what happens when you call out a leftist group with TDS for being idiots and they they cry to the Twitter police who never censors.”

Williams — who served in the Marines and is a Naval Academy graduate — replied, “No. This is what happens when you act like a prick, son. You’re not being persecuted, Sit down, shut up and grow the F up.” Williams has since deleted the tweet.

Paronto fired back, “Prick?? So did you just suspended for your hateful comment Semper Fudge?? Most likely not …and I ain’t your son ‘Sir’.. If I was I’d be an ignorant ass just like you. I grew up a long time ago, long before your Messiah BHO left me and my team to die.”

Bill Gates is pushing genetically engineered seeds that he thinks may put an end to famine. But his reputation should make us wary.
By Warner Todd Huston  September 25, 2022

A top immunologist and vaccine expert in Europe believes the COVID-19 booster shot may have accelerated the growth of his cancer.
By Michael Austin  September 25, 2022
Next