In July, back when the left was trying to manufacture any excuse for Joe Biden to escape debates, New York Times columnist Thomas Friedman came up with two preconditions the president needed to agree with, in his mind, for any matchup to take place.

First, Friedman said, President Donald Trump needed to release his taxes. Second, “Biden should insist that a real-time fact-checking team approved by both candidates be hired by the nonpartisan Commission on Presidential Debates — and that 10 minutes before the scheduled conclusion of the debate this team report on any misleading statements, phony numbers or outright lies either candidate had uttered.”

Well, as for the taxes, The New York Times claims it’s gone ahead and done that work for Trump. Whether or not you buy their is another question entirely, but there it is.

On the second count, Friedman needn’t have worried; there were plenty of fact-checkers working in near-real time to call the president out for his lies — even when he was telling the truth.

The Washington Post was one such institution; democracy dies in darkness, after all, and The Post vouchsafed to its readership that it’d keep every light in the place on.

The vast majority of The Post’s fact checks — and this is a shocker indeed — involved statements made by Trump.

One of them in particular involved whether or not Biden had given his support to the Green New Deal — the formless, expensive suite of reforms first proposed by New York Democratic Rep. Alexandria Ocasio-Cortez which may or may not have to do solely with the environment.

Here was the statement The Post fact-checked: “About the Green New Deal. And it’s not two billion or 20 billion, as you said, it’s 100 trillion dollars I’m talking about. They want to rip down buildings and rebuild the building instead down the street. That is not where airplanes are out of business, where two car systems are out, where they want to take out the cows. Not you know, that’s not true either.”

Bald-faced prevarication, all of it.

“Biden has never supported the Green New Deal, and the rest is also false,” The Post’s fact-checkers said.

“The Green New Deal is a nonbinding resolution from Rep. Alexandria Ocasio-Cortez (N.Y.) and other Democrats that calls for cutting carbon emissions to net-zero over 10 years while making steep investments in green infrastructure.

Now, while the Green New Deal is technically a non-binding resolution, as The Washington Post claimed, it’s a bit more than that — it’s a protean blueprint for how progressives plan to remake our energy infrastructure and our economy over the coming decades which may or may not have to do with banning airplanes or getting rid of bovine eructations.

When it does take shape, at least if it resembles the form in which it’s currently being proposed, it could cost the better part of $100 trillion (though that’s a higher-end estimate, to be fair).

Never mind, though — since, as The Washington Post said, Joe Biden is against it. Except when he wasn’t, like when he unveiled his environmental plan last year: 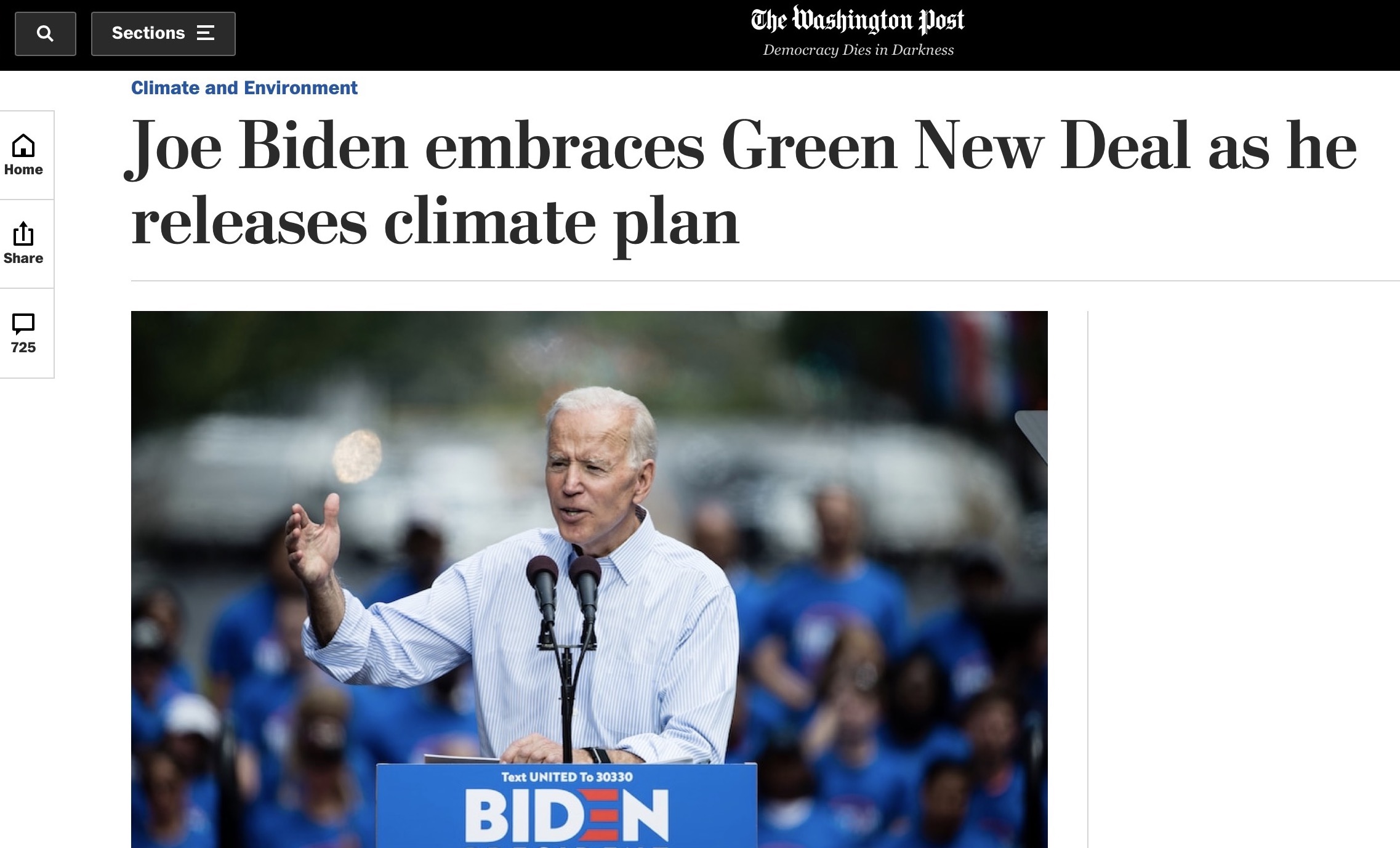 Just think: If Thomas Friedman had his way, we’d have had a “real-time fact-checking team” present in Cleveland on Tuesday, adding to the chaos.

He foresaw no way this could have gone wrong. There are times I wonder whether The Times keeps David Brooks on staff just so Friedman doesn’t feel like the most obtuse man in the newsroom.

But back to The Post: “Joe Biden is embracing the framework of the Green New Deal in his bid for the White House, calling on the United States to eliminate climate-warming emissions by no later than the middle of the century while creating millions of new jobs and rallying the rest of the world to forestall dangerous rising temperatures,” the paper reported in June 2019.

The Post went on to report that “Biden’s climate plan adopts the rhetoric — and at times, many of the actual policy proposals — of the Green New Deal resolution put forward this year by Rep. Alexandria Ocasio-Cortez (D-N.Y.) and Sen. Edward J. Markey (D-Mass.), which calls on the nation to eliminate its carbon footprint by 2030.

“Biden is trying to make his case on climate change — setting his own date for the nation to achieve net-zero emissions at 2050 at the latest — while vowing to help coal workers transition to a new clean-energy economy creating more than 10 million well-paying jobs.”

A year and change later, The Post’s fact-checkers insist that “Biden is not a supporter and his own climate plan is more limited, calling for net-zero emissions ‘no later than 2050.’”

Now it is true that, as USA Today reported, Biden’s climate plan “from the Green New Deal in a number of ways, particularly pertaining to the social issues linked to Ocasio-Cortez and [Massachusetts Democratic Sen. Ed] Markey’s bill. The Green New Deal calls for universal jobs and health care; Biden’s plan does not.”

Fair enough, but even USA Today pointed out that the plans “aren’t too different” and that “Biden’s plan calls the Green New Deal a ‘crucial framework’ for meeting climate challenges, citing two core values Biden sees as similar between the two: the need to act on climate change with more ambition, and the idea that the environment and economy are connected.”

Given all this, it’s worth mentioning how The Post began its fact-checking piece: “In the contentious first presidential debate between President Trump and former vice president Joe Biden, Trump repeatedly relied on troublesome and false assertions that have been debunked throughout his presidency. Biden, by contrast, stretched the truth on occasion.”

The Post has an interesting definition of “stretch[ing] the truth.” When asked point-blank whether or not he supported the Green New Deal, Biden said he didn’t.

“I support the Biden plan that I put forward,” Biden said. “The Biden plan, which is different than what [Trump] calls the radical Green New Deal.”

He should perhaps tell that to the people who write his webpage:

His website says he supports the Green New Deal. @realDonaldTrump is right. pic.twitter.com/tFkop9FiXU

“Biden believes the Green New Deal is a crucial framework for meeting the climate challenges we face. It powerfully captures two basic truths, which are at the core of his plan,” his campaign website says.

But Biden doesn’t support the Green New Deal, if we’re to believe The Post.

This is the state of fact-checking in 2020, apparently.

It’s not just that The Washington Post doesn’t believe President Trump. They don’t even believe their own reporting.