With a prediction for very stormy weather ahead for the nation he loves, meteorologist Karl Bohnak signed off last week after being fired for refusing to take the COVID-19 vaccine.

Bohnak had served as the weatherman at Michigan’s WLUC-TV for 33 years, according to The Washington Post. Gray Television, WLUC’s parent company, instituted a vaccine-or-else policy that went into effect on Wednesday.

“I am sad, but, to borrow a quote from a famous ballplayer, ‘I’m the luckiest man on the face of the earth’ because I had a dream as a kid to be a weatherman.

“That dream came true and to top it off, I got to broadcast weather for one of the most challenging, beautiful spots in the United States. As an added bonus, the people I broadcast to all across Upper Michigan were so kind and encouraging,” he wrote.

But a cloud has fallen over the land of the free, he wrote.

After TV6 fired Karl Bohnak, a beloved weatherman of 30 years, for his choice to not be vaccinated, the people of small UP town, Iron Mt., Michigan protested by the dozens and some called for a boycott of TV6.
The UPLP was on the scene. pic.twitter.com/zHcfviRGQX

“The abrogation of our liberty and freedom under the guise of a pandemic is very disturbing to me. Hopefully, whether you lean right or left, you are concerned about what has occurred the last year-and-a-half.

“I just wanted to go about my business, ‘live and let live’, and keep my mouth shut. But this act by the federal government through corporate America has brought me to a crossroads. Our way of life, our freedom and liberty, is collapsing before our eyes,” Bohnak wrote.

He said personal freedom should be paramount.

“Many of you have taken one of these injections, and that is absolutely your right. It is also my right to choose the medical options I feel are right for me. I have authority over my body.”

Bohnak then laid out why he had refused the vaccine.

“I have decided against the vaccine option, first and foremost, because the manufacturers of these injections have absolutely no liability if injury or death occurs after the shot. I asked myself, would I buy brakes for my vehicle if the brake company had no liability if the brakes failed? No!

“So, I will certainly not allow a medicine in my body from a company that does not stand behind its product,” he wrote.

Bohnak said he might have received the vaccine had the risk of death from COVID-19 been significant.

“However,” he wrote, “for a normally healthy adult not housed in a nursing home or not suffering from serious comorbidities, the chance of surviving COVID is well over 99 percent. I will take the chance and go without a shot. I choose not to risk serious side effects.”

“It’s time to wake up to what is occurring here in America and across the world,” he continued.

“We are being bludgeoned with fear, I believe, in an effort to control us. Eminent doctors, virologists and epidemiologists who post facts contradicting the ‘official’ accepted narrative regarding COVID are being censored; some are losing their jobs.

“It’s time to honor those who served. For me, I honor them by saying ‘Enough! I have the right to choose — we all do. If we do nothing, we will lose that right.”

Bohnak concluded with “a distillation of a portion of Jefferson’s masterpiece, the Declaration of Independence: ‘When tyranny becomes law, resistance becomes duty.’

“Those who love America and the freedom and liberty it stands for, must speak up. Hopefully, it’s not too late,” he wrote.

The Western Journal has published this article in the interest of shedding light on stories about the COVID-19 vaccine that go largely unreported by the establishment media. In the same spirit, according to the most recent statistics from the CDC’s Vaccine Adverse Effect Reporting System, 7,653 deaths have been reported among those who received a vaccine, or 20 out of every 1,000,000. By contrast, 666,440 deaths from COVID-19 have been reported by the CDC, or 17,537 out of every 1,000,000. In addition, it must be noted that VAERS reports can be filed by anyone and are unverified by the CDC. Thus, as the agency notes, “reports of adverse events to VAERS following vaccination, including deaths, do not necessarily mean that a vaccine caused a health problem.” The decision to receive a COVID-19 vaccine is a personal one, and it is important to consider context when making that decision. — Ed. note

Yet again, President Joe Biden had an embarrassing bumble during a speech when he appeared visibly confused midsentence.
By Michael Austin  October 28, 2021

Community Furious After Young Kids Photographed in Gay Bar...But Look Who Led Them There in the First Place

Watch: New Tucker Doc Will Blow the Doors off the Jan. 6 Story Told by the Establishment Media

The DOJ is no longer committed to enforcing U.S. laws. Rather it exists to advance the Biden Administration agenda and it uses its vast powers to punish its political adversaries.
By Elizabeth Stauffer  October 28, 2021

'Professional athletes serve as some of our country's greatest role models and we need them to join us to fight for democracy,' the CEO said.
By Dillon Burroughs  October 28, 2021

Springsteen throwing his fans under the bus with a nod at the behest of race-baiting Barrack Obama  is beyond insulting.
By Jack Gist  October 28, 2021

New York's Democratic leaders have alienated much of the police force with budget cuts, vaccine mandates and other policies.
By Dillon Burroughs  October 28, 2021

Nationally, more than 500 attempts to recall elected officials have happened this year, up from about 400 in a typical year.
By The Associated Press  October 28, 2021 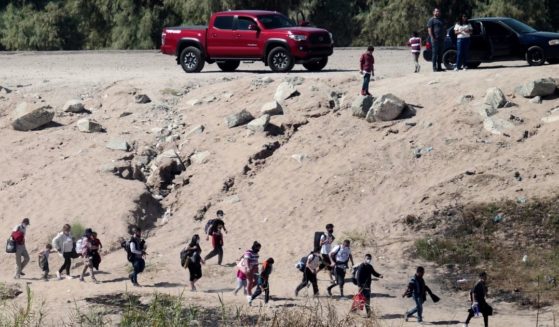