President Donald Trump’s “Keep America Great” rally in Phoenix on Wednesday drew tens of thousands of supporters, but also crowds of protesters demonstrating against the president and his conservative policies.

While the demonstrators remained peaceful, vulgar terms like “f— the Second Amendment,” “fascist pig” and “f— ICE” were all too common.

The protesters also brought out a few of the old favorites — “Nazi scum,” “Hey hey, ho ho, Donald Trump has got to go,” and “Not my president” — as they gathered at a designated “free speech” zone outside of Veterans Memorial Coliseum, where the rally was being held.

WARNING: The following photos and videos contain vulgar language that some readers may find offensive.

One protester walked by several Trump supporters, yelling profanities and disparaging the Second Amendment as he did.

“Do you support the Second Amendment?” The Western Journal asked.

Protester at @realDonaldTrump #KeepAmericaGreat rally in Phoenix says he doesn’t support the right to keep and bear arms. pic.twitter.com/8KC7PO1G4U

Many demonstrators were holding signs calling Donald Trump a fascist in one degree or another, but when The Western Journal approached one of the protesters, who chose to identify herself only as “Gabs,” and asked what Trump has done that makes him a fascist, the answer was ambiguous.

“All of his policies and stuff, it just feels like another rise to fascism,” she replied, not adding anything more.

RELATED: Eyeing Another Delay, Biden To Assure Sept. 11 Withdrawal from Afghanistan - But Vets Are Less Certain

“Gabs” from Chandler said Trump’s policies make him a “Facist Pig,” but wasn’t able to give any specifics.

Where does she get her news? Friends, family and The Young Turks. pic.twitter.com/LMJtqqWHto

“Antifa” is anti-free speech — and they admit it.

Outside of the rally, a group of young men with covered faces was holding an “anti-fascist,” or antifa, flag.

“I think it’s important for the community to stand up to fascist organizing,” one of the young men told The Western Journal.

“I oppose [Trump’s] denigration of immigrants coming to this country, he added. “I oppose the fact that he upholds a systemically racist and colonial system.”

And what about the right of people who disagree with antifa’s leftist principles to express their own views?

“I believe in suppressing the speech of people whose ideas I don’t want to gain institutional hold,” the man said.

“I believe in suppressing the speech of people whose ideas I don’t want to gain an institutional hold,” an antifa protester told me yesterday outside of @realDonaldTrump’s rally in Phoenix pic.twitter.com/0C0jUINmug

A protester named Kelly told The Western Journal she felt like she wanted to do more than just whine about the president.

She said her sign, which read “Any Functioning Adult 2020,” was really an “Anyone but Trump” sign, despite the variety of views among the Democratic presidential primary candidates.

“I’ve got to make some decisions later,” she said, referring to the Democratic candidates, “but I think most of them have some really good options for us.”

The back of one protester’s shirt said it all.

“F— ICE,” the shirt said in reference to U.S. Immigration and Customs Enforcement, the agency tasked with enforcing America’s immigration laws within our borders.

In recent years, the “Abolish ICE” movement has gained traction, with Vermont Sen. Bernie Sanders, the front-runner for the Democratic presidential nomination, calling for the agency to be broken up.

This protester’s sign outside @realDonaldTrump’s #KeepAmericaGreat rally in Phoenix says it all pic.twitter.com/Pgc35VoCV8

One of the more popular signs from the protesters characterized Trump as a Nazi pig on one side and bore the words “WTF News: We Televise Fear” in the style of Fox News’ logo on the other.

While the latter was not an attack on Trump, Fox News has been under attack from the left as the president continues to criticize other establishment news outlets for spreading “fake news” about him and his administration.

Cody, who was holding one of these signs, told The Western Journal that news outlets shouldn’t “scare people into beliefs,” but instead should try to “bring people together.”

“Don’t sacrifice truth,” he added. “Just don’t go for the biggest attention-grabber that you can get and then embellish what’s going on.”

Cody said news outlets, like Fox, are trying to divide our country and should report more “loving” news.

Where does he get his news? HBO. pic.twitter.com/jcvrfSnruX

One protester wearing a “Make America Gay Again” cap was handing out flyers with a suggested chant written on them.

A protester at @realDonaldTrumps #KeepAmericaGreat Phoenix rally wearing a “Make America Gay Again” is handing out copies of various chants along the same theme:

Lest anyone think he was calling for violence against the president, the flyers called on Trump to die of “Natural Causes,” a “Heart Attack” or a “Stroke.”

One of the most common chants of the evening was, “No Trump, no KKK, no fascist USA.”

Hundreds of protesters chanted this in unison with drums helping keep the beat.

“No Trump, No KKK, No Facist USA” pic.twitter.com/Pz0IjTAHLB

Protesters standing in the designated “free speech” zone yelled a number of things, including the old favorite that likens Trump supporters to Nazis.

“Nazi scum, Nazi scum,” the protesters chanted at one point.

As protesters moved along the designated free speech area, they chanted “No hate! No wall!”

Donald Trump is “a cancer.”

Speaking to The Western Journal outside the rally venue, protester Louis Albin projected far more calmness than his “Grabbing Our P—y” sign suggested. 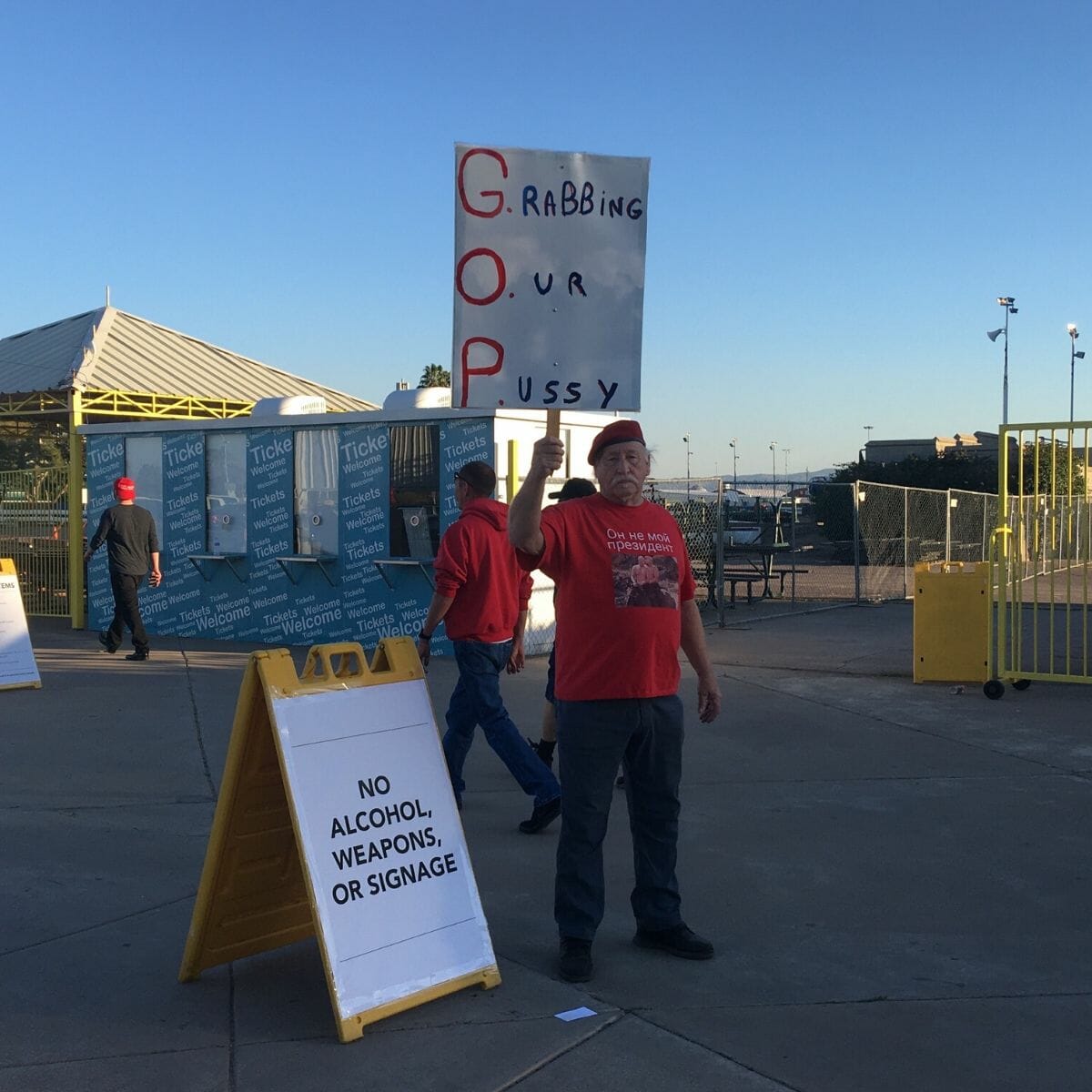 “I think our country is in a complete downfall with this guy in office,” Albin said. “He’s breaking all the rules, all the norms.”

Because of Trump’s “intense” power over the Senate, he added “nothing’s been able to get done.”

So who would he like to see replace Trump?

“I’m Team Anybody that runs against Trump that can win,” he said, though “I’d like to see a woman president.”

The chant that was probably used the most throughout the night was “Hey hey, ho ho, Donald Trump has got to go.”

Do you think this is what Nancy Pelosi said to herself during the impeachment trial?

“Faith is Killing Us.”

A man waving a “Faith is Killing Us” sign wanted people to know that religion is “stupid.”

“G–d— moron,” he told one person challenging his sentiments. “How many cultures has your religion killed off. You f—ing morons.

“How many cultures has your religion killed off? You f—-ing morons.”

A man waving a “faith is killing us” sign outside of Trump’s Phoenix rally last night was intent on being heard pic.twitter.com/IiLuKilfpZ

“Are you against all religion or just Christianity?” The Western Journal asked.

“Faith,” he replied. “Pretending to know what you don’t know is stupid. It’s for children.”

The man encouraged people to base their beliefs on “reason” instead.

This one isn’t new. Those against Trump have made it abundantly clear over the last three years that they don’t respect his election.

It’s been three years, and he was even acquitted during the impeachment trial, but protesters are still crying, “Not my president.”

3+ years after @realDonaldTrump’s 2016 victory, and these protesters at Trump’s #KeepAmericaGreat rally in Phoenix are still at it. pic.twitter.com/SQTdi2MUoH

While Trump’s border wall was heavily protested Wednesday evening, a small crowd of people held signs that were more specific.

Their signs read: “Protect Sacred Land,” “Human Remains Are Still Human! Respect Them!” and “Tear Down the Wall.”

The signs allude to the recent tension between the Tohono O’odham tribe and Trump’s administration after the tribe claimed sacred burial sites were blown up to build the wall. U.S. Customs and Border Protection denied the claims to KTVK, however.

The U.S. is “under a dictatorship.”

One man’s form of protest — a flagpole featuring a North Korean flag over an upside-down American flag — turned plenty of heads.

“Police are the terrorists,” says a man flying a North Korean flag over an upside-down American Stars and Stripes pic.twitter.com/oc3d62u62P

“North Korea symbolizes the dictatorship we are underneath right now,” the protester, Jorge Soria, told The Western Journal. “And this is the chaos that we are in right now, and it’s gonna come.”

Oh, and one more thing: “Police are the terrorists,” the man could be heard saying.

The man’s bold protest even gained the attention of a Trump supporter who was selling pro-Trump flags behind him. Before talking to The Western Journal, he yelled at Soria, “You don’t even know what that flag means!”

“Those people are the most oppressed people in the world,” the Trump supporter said after the exchange of words.

He added: “For this guy to stand out here … to fly that flag and the American flag upside down, that’s crazy.”

“President Trump Resign, You Are Unfit.”

One protester found a seat in the area directly behind the podium Wednesday night. Her sign read, “President Trump Resign, You Are Unfit.”

It only took seconds before security took her sign away, however, and she was quietly escorted out of her seat before many others in the venue noticed.

Just here to make a buck off the “spineless liberals.”

One man was selling “F— Trump” buttons for $1 each to any anti-Trumper interested.

But he wasn’t actually a liberal — or a conservative either.

This man is selling “f—- Trump” buttons to “spineless liberals” outside @realDonaldTrump’s #KeepAmericaGreat rally in Phoenix.

He’s neither conservative nor liberal — says he’s an anarchist.

“I’m here to make some money,” the man, who identified himself to The Western Journal as an anarchist, said.

Joe Setyon
Associate story editor
Joe Setyon is a deputy managing editor for The Western Journal who has spent his entire professional career in editing and reporting. He previously worked in Washington, D.C., as an assistant editor/reporter for Reason magazine.
@JoeSetyon
Joe Setyon is deputy managing editor for The Western Journal with several years of copy editing and reporting experience. He graduated with a degree in communication studies from Grove City College, where he served as managing editor of the student-run newspaper. Joe previously worked as an assistant editor/reporter for Reason magazine, a libertarian publication in Washington, D.C., where he covered politics and wrote about government waste and abuse.
Birthplace
Brooklyn, New York
Topics of Expertise
Sports, Politics
Trump Reveals When He'll Announce Decision on 2024 Campaign
Liberal Activist: Trump Led So Well on CJR That Biden Has Zero Excuse for Failure
Embattled GOP Congresswoman Reveals Who Republicans Attacking Trump Are Really Insulting
Ben Carson Urges Conservatives to Stand Up for Beliefs: 'If You Fight, You Will Win'
US Senator Sends Out the Warning: This Is the Biggest Threat to the Founding Fathers' Carefully Constructed Federalist America
See more...