Andy Ngo, an editor at Quillette, recently tweeted a thread of hate crimes in the last two years blamed on supporters of President Donald Trump that turned out to be hoaxes.

• Right after Donald Trump’s election, the (Southern Poverty Law Center) really stoked panic. A pro-gay Episcopal church in Indiana was vandalized (with) “Heil Trump,” a swastika, & an anti-gay slur. Turns out it was the gay organ player who did it. He was only charged (with) a misdemeanor.

Cops search for vandal who spray painted an Indiana church with a swastika and “Heil Trump” graffiti https://t.co/0U6z8vKoz6 pic.twitter.com/gRkNATL1K3

• Days after the Pittsburgh massacre, Trump supporters were blamed for Nazi vandalism at a Brooklyn synagogue & fires in a Jewish community. Turns out the perpetrator was a gay black man who had worked with city council on an initiative to fight hate crimes.

• One week before the presidential election, a black church in Mississippi was burned in an arson attack. “Vote Trump” was written on the building. After much panic, an investigation revealed that the man responsible was a church member.

• In Nov 2016 a Muslim student at the University of Louisiana said two white racist Trump supporters brutally assaulted her, ripped off her hijab, & robbed her. The story went viral. It was a lie. Media never identified her by name after hoax was revealed.

• I remember that Trump & his supporters were blamed for a spate of anti-Semitic, KKK & Nazi graffiti on the campus of Nassau Community College in Long Island in late 2016. The student responsible was Jasskirat Saini.

• In Dec 2016 a Muslim woman said she was attacked by 3 white Trump supporters in NYC on the subway. She said they tried to rip off her hijab. Yasmin Seweid lied. (The Council on American-Islamic Relations) said Muslims are under tremendous “stress & pressure” resulting in incidents like this.

• In Sep. 2018 a black woman in Long Island said Trump supporters confronted her & told her “she didn’t belong here.” Her car tire was slashed the next day & a hateful note was left behind saying “go home.” Adwoa Lewis made up the whole story.

• In Nov 2016 a Philadelphia neighborhood was rattled when property was vandalized with pro-Trump and anti-black messages. William Tucker was identified as the vandal through CCTV footage.

• In Nov 2016 a black female student at (Villanova University) in PA said a group of white men yelling “Trump!” knocked her to the ground on campus. However a police & university investigation was halted because the student didn’t want to pursue the matter.

• (University of Michigan) student Halley Bass told police a Trump supporter attacked her by scratching her face in Nov 2016. She said she was targeted for wearing a pin in support of UK Remain. As her story fell apart, she admitted to scratching herself.

• 2016: Muslim student at (the University of Michigan) claimed she was attacked by a white man who threatened to burn her hijab. It never happened. CAIR said the attack is “just the latest anti-Muslim incident reported since the election of Donald Trump as president.”

Related:
Vegan Food-Truck Owner Claimed to Be Victim of Hate Crime; Then Truth Came Out, And He's the One Charged

• One day after 2016 election, Eleesha Long, a student at (Bowling Green State University) in Ohio said that white males wearing Trump shirts threw rocks at her & hurled racial slurs. Alleged incident sparked rage on campus, & (the university) hosted a “town hall.” Long made it all up.

• On election night, Canadian Chris Ball said he was beaten by anti-gay Trump supporters in Santa Monica. His friend shared a photo on social media (notice the immaculate watch). Police said he never filed report & he didn’t go to any hospitals in the area. 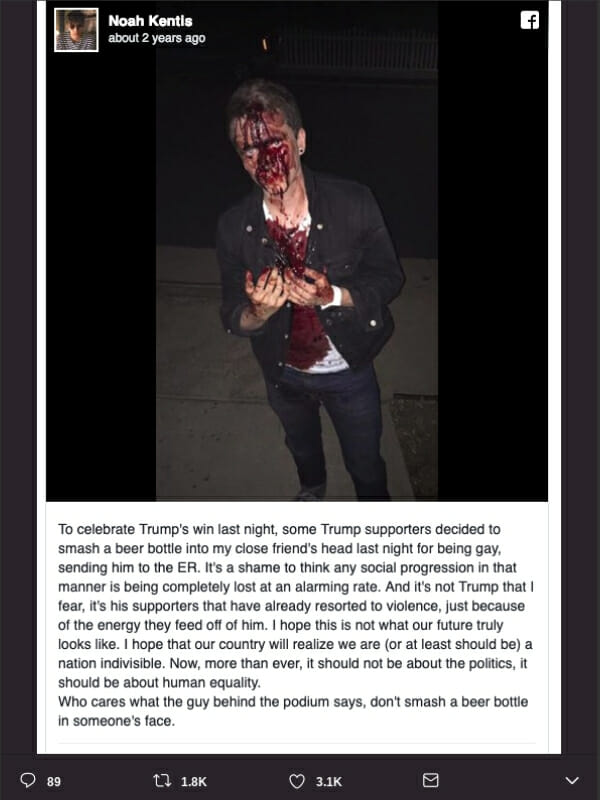 • Charlotte: April 2017 Curtis Flournoy set an immigrant business on fire & left note saying “Trump is our nation builder for White America.” When CCTV showed that perpetrator was black, some sites said it was a white Trump supporter in disguise.

• Nov 2016 Chicago: Taylor Volk, a bisexual student at (North Park University) said she received hateful pro-Trump, anti-gay messages. “This is a countrywide epidemic all of a sudden,” she said at the time. The investigation found that she fabricated the story.

• 2 students at (Babson College) drove thru campus waving flag to celebrate election. Peers said they spat on someone, yelled racist & anti-gay slurs. This was a lie, but everyone believed it. They were kicked out (of their) fraternity. Investigation cleared them of wrongdoing.

• In Nov. 2016, a man in Malden, MA told police he was confronted by two racist white males who made a reference to lynching & said it is “Trump country now.” He fabricated the whole story. Sound familiar?

• Anti-Muslim graffiti saying things like Trump’s “#MuslimBan” was found on (Beloit College) in 2017. College increased security. Investigation found that Michael Kee, a Muslim student, did it himself for attention. 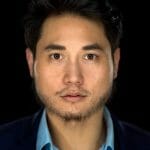