A newspaper owned by the Communist Party of China scrubbed a post bragging about the Wuhan Institute of Virology’s massive bank of viruses, quietly removing evidence that may have shown a faulty seal and other sloppy mistakes in the biosafety level 4 facility.

China Daily, owned by the Publicity Department of the CPC’s Central Committee, boasted of the Wuhan facility’s massive virus bank in May 2018.

“Take a look at the largest #virus bank in Asia,” the paper wrote in a now-deleted tweet. “Wuhan Institute of Virology in Central China’s Hubei province preserves more than 1,500 different strains of virus.”

While it seems an odd thing to brag about, mounting evidence shows the WIV was central to China’s ambitious move to compete with the United States in the field of virology.

Attached to China Daily’s post were three pictures, including two that showed some faulty lab gear, according to the New York Post.

In one photo, a lab worker is shown reaching into a freezer, seemingly holding virus specimens. The photo “showed a broken seal on a freezer at the Wuhan Institute of Virology,” according to the Post.

The Jerusalem Post also identified the same image as “showing a broken seal on a freezer in the laboratory that contained around 1,500 strains of deadly viruses.”

In addition, a major buildup of ice can be seen on an interior door, as well as layers of frost covering several of the other doors. 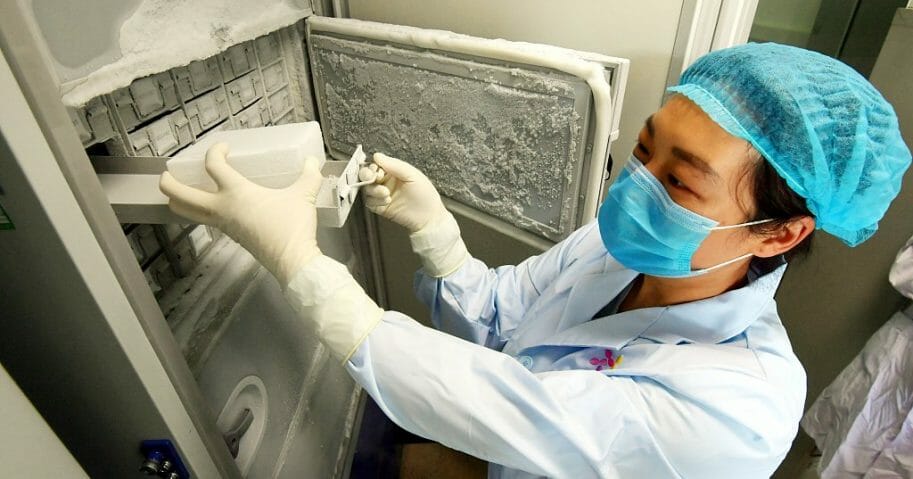 A photo taken inside the Wuhan Institute of Virology shows a freezer for storing specimens. (@ChinaDaily / Archived Twitter screen shot)

A worker handling the specimens in the pictures is seen wearing only basic safety gear, including gloves, a hair net and a thin surgical mask.

Another image showed the same door nearly shut; it’s unclear whether the door was able to close at all, given the ice buildup. 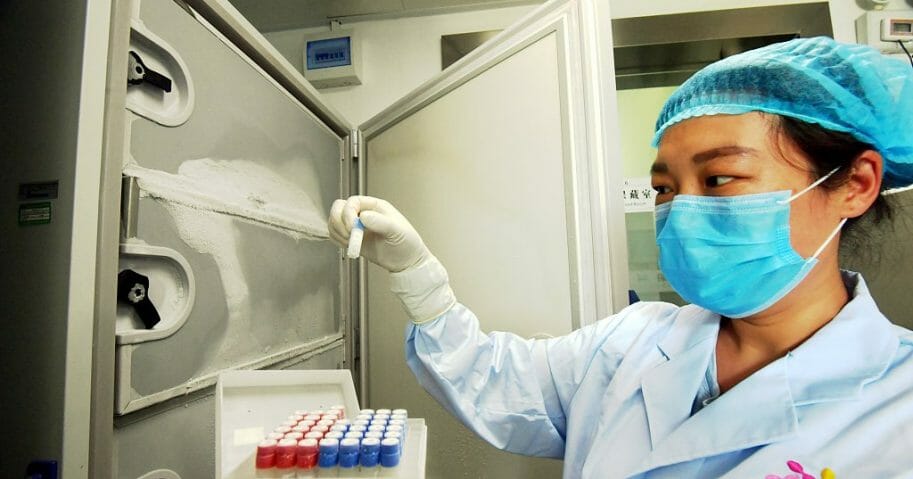 While the degree of functional impairment — if any — to this equipment caused by the ice buildup and broken seal are unable to be determined by examining these images, the manufacturer of a similar laboratory freezer recommends regular maintenance of gaskets, including the removal of any buildup of frost on the important sealing device.

There is also, of course, no way to know the last time this vital piece of safety equipment was serviced prior to these photos being taken.

While this is by no means evidence that the virus escaped from the WIV, the images — and their sudden removal by China Daily — certainly do not produce confidence that even basic maintenance procedures were completed regularly inside the high-security facility.

RELATED: Divorce Court Rules Husband Must Pay Wife for Housework She Did Over Course of Marriage

Many of the viruses in this bank were likely bat coronaviruses sourced from the most remote and exotic corners of China, as the WIV made a name for itself by studying the contagious and deadly pathogens.

With the SARS-CoV-2 virus behind the COVID-19 disease belonging to a bat coronavirus family, it’s easy to understand why China might have tried to scrub this post from the internet

Thankfully, screenshots and archived versions of the post remain easily accessible and free from the CPC’s malicious censorship.

The communist regime has been able to craft its own narrative from the coronavirus pandemic, usually by silencing doctors who told the truth while refusing to take blame for the viral outbreak.

While this may work for the Chinese living under the communist party’s authoritarian rule, the world’s free and open access to information is quickly undermining many of China’s claims.

With new information about the origins of the virus behind COVID-19 appearing nearly every day, there’s no telling what damning evidence will surface in the future.

UPDATE, Apr. 24, 2020: Following the publication of this commentary, it was updated to include two additional sources, the New York Post and The Jerusalem Post, both of which reported on the broken seal in the image shown. In addition, some language was edited slightly to make it more clear that The Western Journal cannot verify the state of maintenance at the facility in question, although there does appear to be enough circumstantial evidence, at the very least, to raise questions regarding that maintenance.