To say that the Cleveland Browns have been a profound disappointment this season would be a massive understatement. Predicted to be a strong playoff contender, the team currently sits at 2-6 and is looking at a very real chance of missing the postseason for the 17th straight season.

The Browns, equipped with a potential star quarterback in Baker Mayfield and electric playmakers on both defense and offense, have been a major letdown.

Given the franchise’s putrid recent history of losing and mismanagement, that’s not a small feat.

And yet, despite the fact that futility appears to be baked into the DNA of the Browns, a bizarre incident on Sunday might have brought them to a new low.

After Cleveland lost an embarrassing game to a bad Denver Broncos team that was missing starting quarterback Joe Flacco, there was plenty of blame to go around.

One of the biggest culprits of the Browns’ 24-19 road loss to the Broncos was safety Jermaine Whitehead, whose abysmal attempt at a tackle led to this 75-yard touchdown from rookie tight end Noah Fant.

Whitehead, No. 35, was the initial tackler in the video who bounced off Fant like a child trying to tackle, well, an NFL tight end.

It was a pathetic attempt at a tackle, and Whitehead should have simply owned up to his lackadaisical tackling and moved on. That, clearly, is not what happened.

Instead, Whitehead lashed out at critics on Twitter in the vilest fashion imaginable.

In a series of since-deleted tweets collected by Sports Nation Ohio, he used racial slurs and issued death threats after the Twitter critics began to pile on him.

The vulgar tirade even included Whitehead tweeting the address of the Browns team facility so he could confront detractor, whom he called a “cracker.” 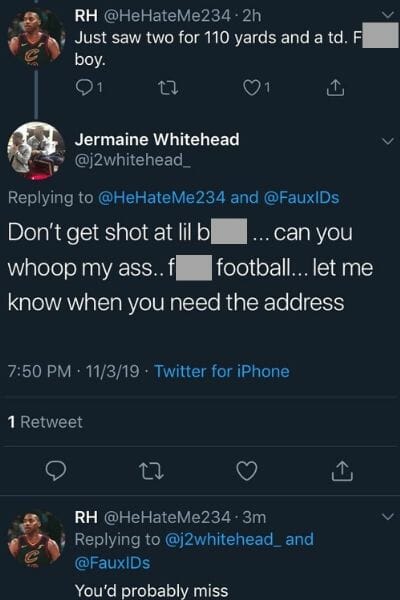 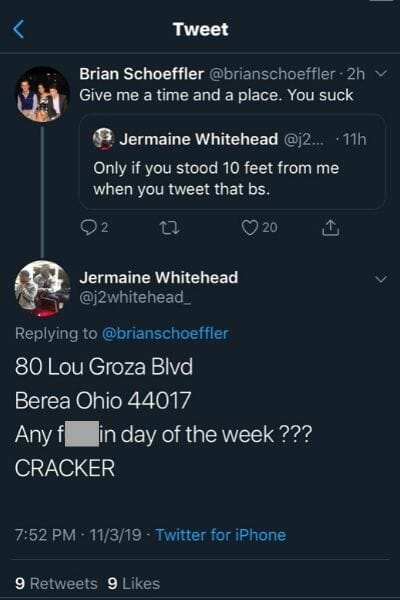 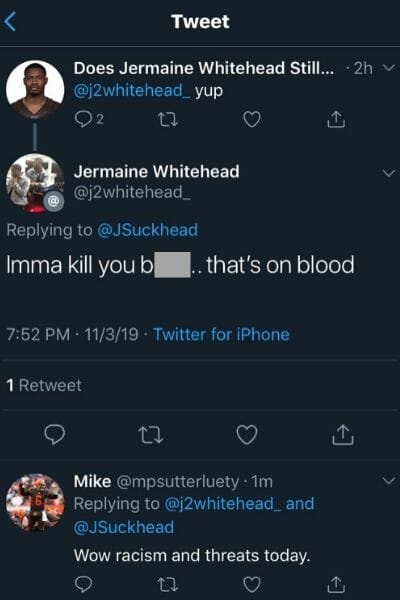 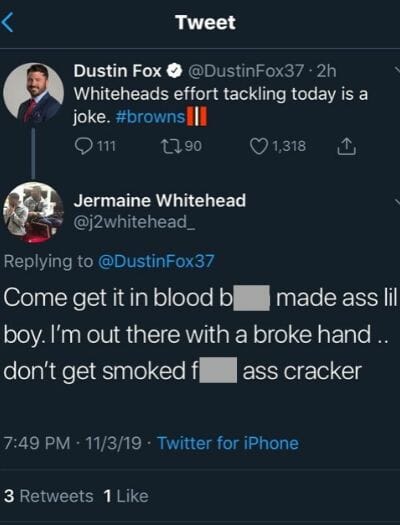 Look, there’s simply no way around it: Whitehead’s Twitter response was disgusting, pathetic and unsightly, not unlike his tackling.

The 26-year-old Mississippi native did apologize on Instagram, according to ESPN, but for his performance, not his tweets.

“Crazy world. They line it up and say anything in the book too you,” Whitehead said in an Instagram post that appears to have been deleted.

“They tell you take the high road, when yo whole life you was taught to meet fire with fire. I do apologize for my performance, but having a broke hand and a strong fear of letting my team down is my downfall. Whatever happens happens. Ain trippin. They probably gone still talk crazy but this me getting smoke off my chest. I don’t need one like.. this from me to me! Keep ya head up homie, can’t nobody f— with you. I dare em to try,” Whitehead wrote, according to the ESPN transcript.

The Browns distanced themselves from Whitehead’s tweets in a statement in their immediate aftermath.

The next morning, the Browns cut ties with Whitehead, releasing him. Given that he isn’t exactly a star, it’s hard to credit the team too much for parting ways with a troubled player. It should be an easy decision.

Cleveland will host the 6-2 Buffalo Bills on Sunday as they look to make a last, desperate push to make the playoffs.