Her game face on, Melania Trump dutifully tried her hand at lawn bowls during a solo outing Friday to a historic London veterans’ retirement home on her first visit to Britain as America’s first lady.

The pair toured the hospital grounds before joining a small group of elementary schoolchildren and veterans in making red paper poppies, a national symbol for remembering and honoring those fallen in war.

She greeted the children with a cheery “hello” and a big smile, shaking their hands and asking one to show her how to make a poppy pin. 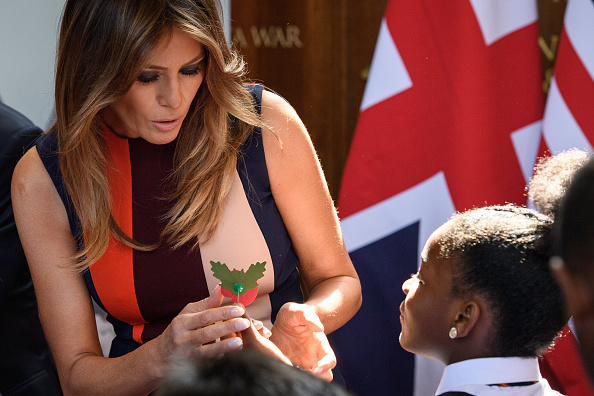 Reporters were shooed out of the room as the first lady engaged the group in a discussion about “Be Best,” a campaign she unveiled in May to focus on childhood well-being and to teach them kindness.

She ended the visit with a game of bowls with May, the children and the veterans.

There was no sight or sound of the thousands of people rallying against Trump in central London during his wife’s visit, which her staff managed to largely keep secret to avoid the ire of demonstrators.

Wearing a sleeveless multicolored dress by British fashion designer Victoria Beckham and spiky flesh-tone stilettos, Trump appeared to take the game seriously and followed a boy’s advice on how to hold the ball. She stooped several times to roll it across the lawn, smiling and making a few faces. 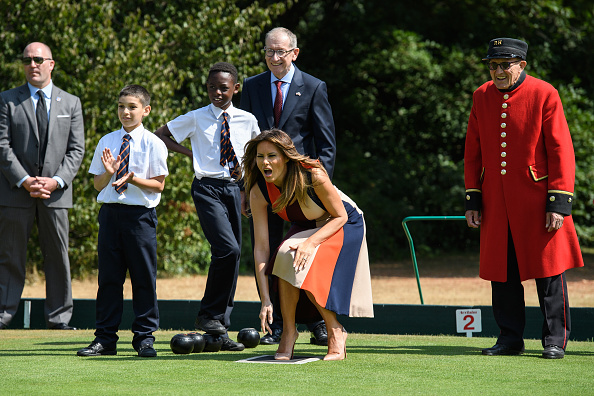 Children waving British and U.S. flags cheered loudly. She also initiated a high-five with a veteran who gave her effort a thumbs-up.

The visit wrapped up before Trump and May’s news conference at her official country estate, where he denied ever criticizing the prime minister — not long after a British tabloid published an interview that included his biting criticism of aspects of her leadership.

Related:
Flashback to When Things Were Better: Melania Trump's WH Christmas Decorations Throughout the Years

The first lady’s appearance came amid her return to the international stage after she was hospitalized in May for a kidney surgery and dropped out of sight for nearly a month.

She did not accompany the president to his meetings with world leaders in Canada and Singapore last month.

Trump and the president were reuniting later Friday for a return trip into the country for a social visit and tea with Queen Elizabeth II at Windsor Castle.

The couple planned to head afterward for a private weekend at one of Trump’s golf properties in Scotland.

The Western Journal
Real Stories. Real People.
You Can Read All the 'Twitter Files' Right Here
Muslim Came to US Hoping to Convert Americans to Islam, Now He Teaches Others About Jesus
'WJ Live': Ron DeSantis' Clever Solution to Halt Kids' Drag Shows
Transcript: Fox Anchor Who Left Over Liberalism Gets Blunt About Why She's Running for AZ Gov
Video: Biden Calls Another Lid, But This Time He's Staying Hidden Until the Final Debate
See more...
Advertisement