A woman’s internship at NASA reportedly didn’t make it off the launch pad after she tweeted a vulgar insult at one of the space agency’s most iconic figures.

The unidentified woman, using the Twitter account “@NaomiH_official,” expressed her excitement about the job Monday by declaring, “Everyone shut the f— up. I got accepted for a NASA internship.”

“And I am on the National Space Council that oversees NASA,” he tweeted back.

She apparently didn’t realize she was directing her invective at Homer Hickham, an author and former NASA engineer who is very well known in space circles. The 1999 film “October Sky” was based on Hickham’s acclaimed memoir, “Rocket Boys.”

“During his NASA career, Mr. Hickam worked in spacecraft design and crew training,” the space agency says in a biography of Hickham on its website. “His specialties at NASA included training astronauts on science payloads, and extravehicular activities (EVA). He also trained astronaut crews for many Spacelab and Space Shuttle missions, including the Hubble Space Telescope deployment mission, the first two Hubble repair missions, Spacelab-J (the first Japanese astronauts), and the Solar Max repair mission. Prior to his retirement in 1998, Mr. Hickam was the Payload Training Manager for the International Space Station Program.”

Hickham is still involved with NASA, as he informed “NaomiH.” 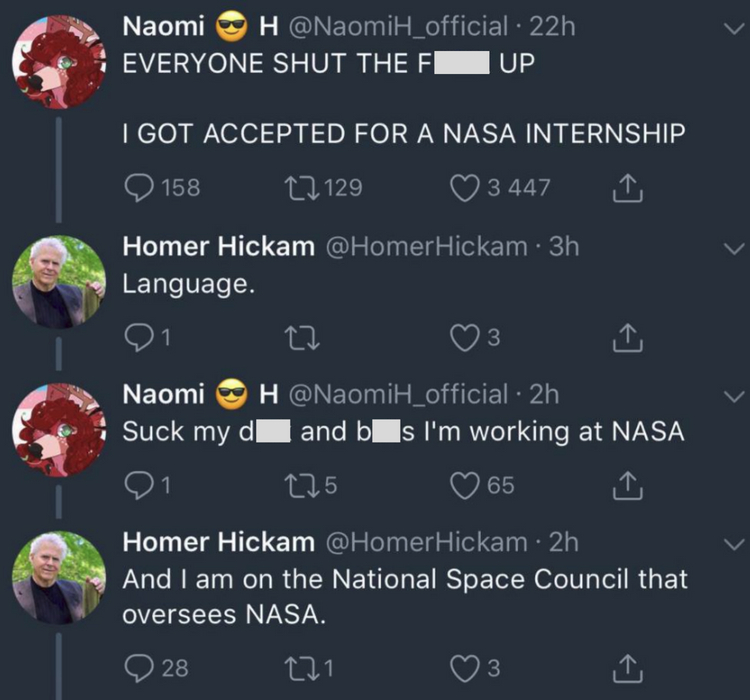 According to Newsweek, Hickham said in a blog post Tuesday he learned she had lost her internship. (The post apparently was deleted but was archived on Google as of Thursday morning.)

However, he said he took no action to make that happen.

Do you think she should have lost her internship over those tweets?
Yes: 96% (299 Votes)
No: 4% (13 Votes)
Advertisement - story continues below

“Recently, it was called to my attention on Twitter that someone was being hired by NASA and that they were using the F-word in a tweet about it,” Hickham wrote.

“I’m a Vietnam vet and not at all offended by the F-word. However, when I saw NASA and the word used together, it occurred to me that this young person might get in trouble if NASA saw it so I tweeted to her one word: ‘Language’ and intended to leave it at that.

Related:
Artemis I Moon Mission Scrubbed on the Launchpad After Officials Notice Something Terribly Wrong

“Soon, her friends took umbrage and said a lot of unkind things but long after I was gone as I immediately deleted my comments and blocked all concerned.

“Later, I learned she had lost her offer for an internship with NASA. This I had nothing to do with nor could I since I do not hire and fire at the agency or have any say on employment whatsoever.

“As it turned out, it was due to the NASA hashtag her friends used that called the agency’s attention to it long after my comments were gone.”

Hickham said in the blog post that he had spoken with the woman and she apologized for her comments. He said he was impressed by her resume and was doing “all I can” to help her find another position in the aerospace industry.

Hillary Clinton put her hypocrisy on display during an interview that aimed to slam Trump supporters, but exposed the left instead.
By Matthew Holloway  September 25, 2022