The U.S. Army is rolling out a new rifle that is sure to leave a lasting impression on bad guys, but only in the unlikely event they’re able to get an up-close look at it.

The M110 Squad Designated Marksman Rifle will be rolled out soon after being deemed fit for soldiers, according to the Army.

Chambered in 7.62, the M110 will provide operators with the ability to project power in a way the standard 5.56 round simply can’t.

With a range of 800 meters, the rifle is more than capable of reaching out and touching anyone intent on doing harm to America.

The rifle, manufactured by Heckler & Koch, is a variant of a design based on the AR-15 platform. This means soldiers who already have experience on the Army’s M4 carbine should have an easy time adjusting to the magazine-fed rifle.

Topping the rifle will be a variable 6x magnification Sig Sauer scope, according to a news release from the company.

The advanced optics will give any squad equipped with an M110 the ability to identify and engage targets at a range not possible with other standard weapons.

In addition to the M4 carbine and M249 machine gun, this will allow soldiers to be more flexible in a number of ways.

For one, the rifle’s heavier rounds mean its shots are more predictable at long range. Coupled with the standard riflescope, this means any bad guy wanting to challenge an Army squad in its range is going to have a rough time. 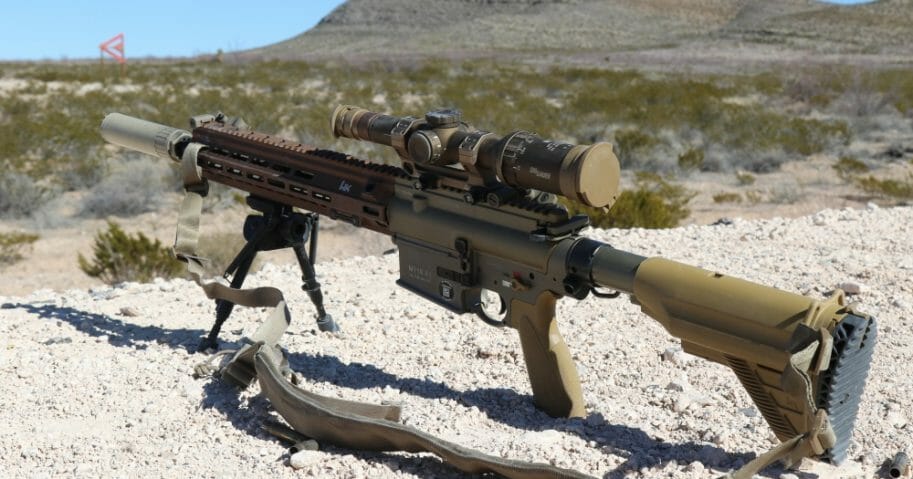 An M110 rifle seen during testing at Fort Bliss in Texas.

The more powerful 7.62 round also gives the rifle more lethality and the ability to punch through cover that the 5.56 round might not be able to.

This new rifle comes at a time when the U.S. military is ramping up technology and arms available to its frontline combatants.

Army soldiers are enjoying increased reconnaissance ability thanks to the Black Hornet drone, a small UAV that allows troops to gain a bird’s-eye view of the battlefield without exposing themselves to danger.

Coupled with the M110, this will give Army squads unparalleled control of the battlefield.

RELATED: Soldier Puts an End to Potential Mass Shooting by Mowing Over Shooter with Truck

The Marines will soon have access to an even more explosive piece of gear — a modular grenade that can be deployed as a regular piece of ordnance or stacked three-high to demolish small structures.

Although countries such as China and Russia might soon attempt to test the resolve of the U.S. military, upgrades in the American arsenal could be the game-changers we need to remain the sole hyperpower of the world.

Alex Brandon / AP Legal Experts: Trump Does Have Power To Deploy Military Domestically, But Only Under Certain Conditions