It’s no secret that Joe Biden’s old age and mental deficiencies made the vice presidency an appealing proposition for such a self-interested politician whose radical leftism will be on full display mere months after a disastrous primary run.

With the Harris pick, any semblance of moderation in the Democratic Party is officially extinguished.

This won’t bode well for Democrats desperate to win battleground states, such as Arizona, Florida, and Wisconsin.

From the Green New Deal to gun confiscation to publicly funded health care for illegal immigrants, the Biden-Harris platform is the most liberal in the history of the Democratic Party.

Independents are not ready for such “wokeness” in their presidential elections.

Making matters worse for the Democratic Party, Harris has to contend with Vice President Mike Pence, who has contributed to many of the Trump administration’s successes in the last four years.

Lost in the liberal media’s victory lap, Biden’s running mate is going up against a vice president whose appeal in middle America cannot be overstated.

With President Trump’s charisma dominating the headlines, Pence’s accomplishments are often ignored — and intentionally so by the left-leaning mainstream media. But there are plenty to celebrate.

First and foremost, Pence has sent a clear message that middle America will no longer be ignored by Washington, D.C., elites.

In charge of staffing much of the federal government, the vice president embraces a wide range of perspectives, many of them outside the “Acela Corridor.” For example, more than 30 people from Indiana work in the Trump administration, including Surgeon General Jerome Adams.

At the policy level, Pence has ensured that the Trump administration enacts a conservative agenda and upholds traditional values.

In 2017, the vice president was instrumental in reinstating the “Mexico City policy,” which restricts U.S. foreign aid from subsidizing entities that offer abortion services.

More recently, Pence met with pro-life activists at the White House and delivered a speech at the 2019 March for Life, where he promised to end taxpayer funding for abortion and empower Supreme Court nominees to overturn Roe v. Wade. (To that end, the vice president helped push the Gorsuch nomination over the finish line.)

While Pence gives President Trump the space needed to lead, he is willing to take action on behalf of the Trump agenda.

For instance, Pence cast the tie-breaking vote to confirm Education Secretary Betsy Devos, a true reformer who believes in religious freedom, due process in sexual-harassment proceedings, and other common-sense ideals.

In fact, the DeVos confirmation was the first time that a vice president broke the tie for a cabinet pick.

Pence’s actions are also historic in other ways.

After it was disbanded in 1993, the Trump administration brought back the National Space Council, with Pence championing $8 billion in new funding for the Space Force — America’s new extra-planetary military unit.

The message is clear: Under Republican leadership, the United States is once again an innovator on the global stage, building on the tradition of 1960s space exploration.

Fast forward to today, and Pence continues to lead the U.S. response to the coronavirus, keeping millions of Americans healthy while balancing the need for robust economic activity.

It was under Pence’s leadership that the United States flattened the curve, setting the economy up for a gradual reopening.

It is this record — a successful, conservative record — standing in Kamala Harris’ way to the White House.

Supporting President Trump on a daily basis, Pence has kept the Trump campaign’s 2016 promises with steady nerves and an unwavering commitment to traditional conservatism.

And Pence will be rewarded for it in 2020. Harris’ Machievelian dream will soon become a nightmare. 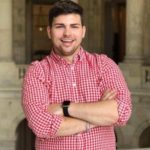 Chad Banghart
Chad Banghart serves as the executive director of the Committee to Defend the President. He is a former Republican National Committee staffer.
Op-Ed: Mike Pence Is Going To Shred Kamala Harris
Op-Ed: Don't Trust the 'Gen Z GOP' - It's a RINO Club Built by and for Anti-Trumpers
See more...
Advertisement

The Republican-controlled Tennessee state House passed a bill on Wednesday that would ban public schools from including critical race theory in their curriculums. The legislation was one of several bills […]