The Biden presidency has been a failure on many fronts. Inflation is skyrocketing and millions of jobs remain unfilled, leading to Stagflation 2.0.

In news conferences, Biden looks plain lost, if he even decides to show up at all. Long, drawn-out pauses are common, yet to no dramatic effect. He slurs his words, rambling about a wide range of left-wing policy priorities without ever really explaining the “benefits” or — most important — the drawbacks of big government.

A Biden news conference is a hodgepodge of random ideas, articulated in juvenile English.

But the problem is most pronounced overseas. On matters of foreign policy, Biden never had profound expertise — despite his decades of experience in Washington, D.C. — and he certainly isn’t peaking now.

Policy expertise aside, the image of Joe Biden traveling abroad fails to project even one iota of authority, capability, intelligence, power or strength. Even in terms of charm and charisma alone, our current leadership is a far cry from the likes of John F. Kennedy or Ronald Reagan.

Trending:
Dan Bongino Provides Major Update from Hospital Bed: 'Thanks for All of Your Prayers'

Most important, this is a president who has abandoned hundreds of Americans in Afghanistan after a botched withdrawal that left 13 U.S. service members dead. Those Americans are stranded in a country overrun by Taliban militants — afraid and with little hope, pinning what’s left of it on the incompetent administration that left them there in the first place.

Even many Democrats recognize the sheer scale of the Afghanistan debacle, criticizing Biden publicly for bungling the withdrawal.

The status quo is untenable. How much faith can Americans and our allies have in a commander in chief who cannot even look after his own citizens?

All the while, America’s enemies grow more adventurous. China and Taiwan are on the brink of war. According to Taiwanese President Tsai Ing-wen, the Chinese threat is rising “every day,” and she is urging the U.S. military to help out. That same China is now mobilizing in Afghanistan, exploiting the American power vacuum and leveraging new Taliban leadership for economic gain.

Then there’s Iran, which Biden has made a diplomatic target in hope of reviving the disastrous Iran deal. Yet Iranian-allied militias continue to carry out attacks on U.S. troops in Iraq on a regular basis.

How does a revised nuclear deal — featuring billions of dollars in giveaways to the Iranian government — combat Iranian aggression?

Alas, Biden is most preoccupied with the Democrats’ tax-and-spend agenda back home, appeasing the radical left with a $1.75 trillion social welfare plan that delayed his current trip to Europe.

What’s left of the moderate Democratic Party and the “woke” AOC contingent has now spent months haggling over how many trillions of dollars to spend and the exact level of high taxation needed to fund it, at least in part.

The message being sent to the rest of the world is clear: America cares more about socialism than foreign policy.

The Biden administration is more focused on government handouts than collaborating with our allies and confronting our enemies. Biden is the puppet of the radical left, not the leader of the free world.

We are losing here and abroad, “led” by our hopelessly lost president. 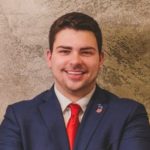 Chad Banghart
Chad Banghart serves as executive director of the anti-Biden Committee to Defeat the President.
Op-Ed: 'Sunset' Provision in Biden Iran Deal Will Trigger in 3 Years, And It Gets Worse
Biden Is Lost Everywhere - Especially Abroad
Op-Ed: As America Is More Divided Than Ever, We're Still Waiting on Biden to Deliver His Magical 'Unity'
Op-Ed: Mike Pence Is Going To Shred Kamala Harris
Op-Ed: Don't Trust the 'Gen Z GOP' - It's a RINO Club Built by and for Anti-Trumpers
See more...
Advertisement

Ty Wells passed away at the age of 23 after a successful swimming career at the University of Arizona.
By Johnathan Jones  February 7, 2023

Nine-year-old David Balogun has managed to become the youngest graduate of a charter school in Pennsylvania.
By Elizabeth Delaney  February 7, 2023

Like many of us, Ben Affleck seems to be wondering how we got to the point where public Satanism became acceptable.
By Peter Partoll  February 7, 2023

Farmers made efforts to keep the plant running. But in the end, it was a matter of economics, and operations were not profitable.
By Mike Landry  February 7, 2023

If you read entertainment media, you might have been led to believe Sam Smith, Lizzo and Madonna were quite the draw. That was not the case.
By Johnathan Jones  February 7, 2023

A liberal activist tried to smear Kyle Rittenhouse's name, but Rittenhouse came back at her with a perfect response.
By Peter Partoll  February 7, 2023

The enterainment world craves attention -- that's what awards shows are for. But the Grammys didn't want this kind from Elon Musk.
By Joe Saunders  February 7, 2023

After the Chinese balloon was shot down on Saturday, photos of sailors recovering the balloon were released.
By The Associated Press  February 7, 2023
Next