Plenty of shade has been thrown Texas Gov. Greg Abbott’s way. It’s what you get for being a conservative, even deep in the heart of Texas.

That shade, however, usually doesn’t involve the fact that Abbott, a Republican, is a paraplegic — and, in particular, how he got that way.

Travis County, Texas, Judge Sarah Eckhardt, a Democrat, is apologizing after trying to make a funny about a jogging accident that left Abbott paralyzed below the waist at age 26. (Abbott is now 61.)

According to The Texas Tribune, Eckhardt was on a panel on progressive activism at the website’s annual festival last week. At some point, she began discoursing on decisions the Texas Legislature had made, including an ordinance in Austin that limited which trees could be cut down.

Eckhardt then joked that Abbott “hates trees because one fell on him.”

According to John Daniel Davidson of The Federalist, who reported the story, her remarks drew laughter from the crowd.

At #TribFest19 panel on progressive activism, @JudgeEckhardt, talking about #txlege overriding local ordinances like Austin’s tree ordinance, says Gov. Abbott “hates trees because one fell on him.” The crowd laughs.

Eckhardt later apologized for the offensive remark about the governor in a statement.

“In my panel today at the Texas Tribune Festival on ‘Public Enragement’ I spoke about the importance of being able to disagree without being disagreeable,” Eckhardt said. “Then I said something disagreeable.”

“I want to apologize to Governor Abbott. I made a flippant comment that was inappropriate. The comment did nothing to further the debate I was participating in, much less further the political discourse in our community, state, and nation.

“While the Governor and I disagree on a number of issues, that is no excuse to be disagreeable.”

According to the Tribune, Abbott was paralyzed during a jog on a windy Houston day some 35 years ago when a tree from a private property fell on him. Abbott would later obtain a judgment from the homeowner and a service that had inspected the tree in question and found it to be in sound condition.

Abbott said that while the judgment allowed him to pay for his medical care, he would give it all back to walk again.

RELATED: Gov. Abbott Wants to Turn Texas Into a Conservative Fortress, Draws a Line in the Sand When It Comes to 2nd Amendment

“If you could name the person I could write the check to, I’d send all this money right back if I could walk again.”

So, clearly that’s the thing you want to make fun of, right?

Travis County Republican Party chairman Matt Mackowiak said that the quip showed a “profound lack of compassion” toward Abbott and others with disabilities.

“Judge Eckhardt apparently believes that his disability is open to ridicule if it helps her make a political argument,” he said in a statement.

“This joke represents a profound lack of compassion from Judge Eckhardt. After news reports surfaced about her outrageous joke, she has since offered a weak apology.

“I hope she takes some time to reflect and reaches out to Governor Abbott and his family to also privately apologize. There is no place for insulting Americans with disabilities and Judge Eckhardt should know better.”

What’s darkly funny about this whole thing is that the judge says she was talking “about the importance of being able to disagree without being disagreeable” and then says what she calls “something disagreeable.”

I’d argue it was something a bit more sick and classless than that.

Tolerance flies out the window for the left when cheap political points can be made.  When they’re too cheap, simply issue a pro forma apology and everything is all right again.

Eckhardt’s remark was far beyond the pale and deserves an apology far more remorseful and searching than this drivel. 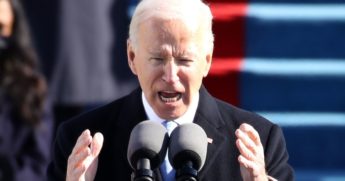