To The Washington Post, Fox News’ opinion hosts represent a sort of parallel ruling junta, a council of Svengalis whose outrage has the president singing their tune.

It’s a curious theoretical arrangement, to be sure, one that assumes not only that neither party could reach conclusions independent of each other but also that, in fact, the relationship is very much reversed.

This isn’t an uncommon line, and not just inside the walls of The Washington Post’s K Street headquarters: President Donald Trump exercises no agency of his own, but instead sits blank-faced in front of a TV stuck on a single channel inside the Oval Office all day, only averting his gaze to turn to an aide, point at the television and simply utter, “Make it so.”

Oh, to be a Fox News host. By extension, this means they’re really the ones in charge. After all, according to this narrative, they are responsible for the president wanting to reopen the country amid the coronavirus outbreak.

An example: “The Fox News whipsaw on coronavirus: In another swerve, hosts push Trump to abandon shutdown,” reads a headline published Wednesday in The Post.

If a “whipsaw” on COVID-19 is bad, one wonders what those at The Post think of their own, from decrying Trump’s travel restrictions on China at the end of January to saying that all sorts of travel restrictions — including trips outside to do anything other than getting groceries or medicine — must continue indefinitely. But never mind that right now.

“For weeks, hosts scoffed at the looming coronavirus crisis, only to make an abrupt about-face last week when President Trump acknowledged the severity of the pandemic and declared a national emergency to fight it,” the piece stated. “But now, Fox’s pundits have changed their minds once more — and Trump is listening.

“Early this week, the cable network’s most prominent figures began urging the president to ditch the restrictions and get people back to work, even if doing so risks the public’s health.

“The commentary dovetails with, and may even have encouraged, Trump’s expressing a desire for businesses to start reopening after the federal government’s 15-day, stay-at-home period ends on Monday. Trump made his intentions clear Tuesday during a town-hall style interview on Fox, saying he wants to have the country ‘opened’ by Easter — April 12.”

On Sunday night, Steve Hilton, one of Fox News’ weekend hosts, said it might be time to consider getting Americans back to work and mused about the phrase, “The cure is worse than the disease.”

WE CANNOT LET THE CURE BE WORSE THAN THE PROBLEM ITSELF. AT THE END OF THE 15 DAY PERIOD, WE WILL MAKE A DECISION AS TO WHICH WAY WE WANT TO GO!

Oh, you’ve got him now, Post. Writers Paul Farhi and Sarah Ellison noted other hosts, including Sean Hannity, Tucker Carlson and Laura Ingraham, following a similar line in the days following Hilton, with administration officials such as Larry Kudlow appearing on Fox News to talk about how the cure shouldn’t be worse than the disease.

Even in a vacuum, this isn’t the soundest hypothesis. With all due respect to Steve Hilton, a much more accomplished man than I am, when I find myself watching his show on Fox News on a weekend, it’s a reminder that maybe I should be walking my dog or enjoying some time with my wife as opposed to spending more time watching the news. The president doesn’t have a dog to walk, but I think his emotions wouldn’t be substantively different.

However, this isn’t a vacuum. Steve Hilton gave this opening monologue on Sunday evening. Two days earlier, The New York Times published an Op-Ed with the headline, “Is Our Fight Against Coronavirus Worse Than the Disease?” 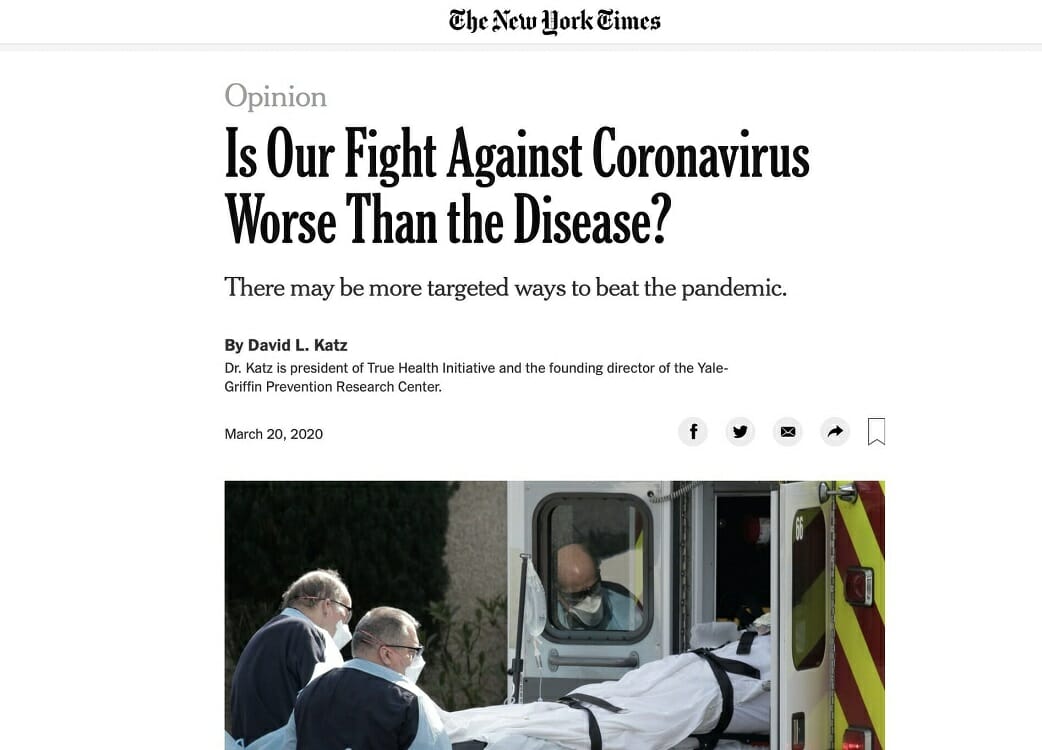 In the piece, Dr. David L Katz questioned guidelines regarding social distancing and argued we might be able to mitigate the economic damage from the disease by letting people who are younger and aren’t in at-risk groups return to work sooner.

“What we know so far about the coronavirus makes it a unique case for the potential application of a ‘herd immunity’ approach, a strategy viewed as a desirable side effect in the Netherlands, and briefly considered in the United Kingdom,” Katz, founding director of the Yale-Griffin Prevention Research Center, wrote.

“The data from South Korea, where tracking the coronavirus has been by far the best to date, indicate that as much as 99 percent of active cases in the general population are ‘mild’ and do not require specific medical treatment,” he said. “The small percentage of cases that do require such services are highly concentrated among those age 60 and older, and further so the older people are. Other things being equal, those over age 70 appear at three times the mortality risk as those age 60 to 69, and those over age 80 at nearly twice the mortality risk of those age 70 to 79.”

The Times would say Wednesday that “Mr. Katz’s piece has been rebutted by other experts.” This was an interesting and rather strong choice of words, inasmuch as it linked to a Fortune piece that questioned the assumptions Katz used but didn’t offer a direct rebuttal to many of the facts he used.

Perhaps The Times saw, as it mentioned in the Wednesday wrap-up, that the “White House seized on opinion pieces” such as Katz’s to make their case. (There Republicans go! “Seizing” upon stuff again!) Thusly did mere disagreement become rebuttal.

Also, if the proof that Trump is letting his coronavirus policy be dictated by Fox News is that it happened in close proximity to Hilton’s Sunday monologue, you know who else might do it, too? New York Gov. Andrew Cuomo.

According to the Albany Business-Review, Cuomo said Monday that it was time “to plan the pivot back to economic functionality.”

“I take full responsibility for shutting off the economy,” the Democrat said during one of his marathon news briefings. “But we also have to plan the pivot back to economic functionality.

“You can’t stop the economy forever. So we have to start to think about, does everyone stay out of work?”

Now, this took place at a further remove from Hilton’s monologue than Trump’s tweet, but not by much. It raises the question — is everyone taking orders from Fox News? One look into those eyes of Tucker Carlson and it’s nothing short of hypnosis, apparently.

It’s hardly difficult to see, if you want to see it, that what Fox News hosts were saying wasn’t entirely different from what other conservatives have been thinking — including some within the White House. It’s also not that different from what some scientists and epidemiologists are saying, either.

This isn’t necessarily a majority opinion yet, mind you, and this isn’t your writer cosigning it. However, the idea that Fox News is a potential driver of White House policy is apparently too good for some to ignore, no matter how unlikely that case may be.

There are so many problems with this bit of wag-the-dog-ism, starting with the idea that we need to reopen for business at the earliest possible opportunity is hardly an uncommon one. The number of people going to the unemployment line attests to the urgency of ending the lockdown. Furthermore, if Fox News’ “commentary dovetails with, and may even have encouraged” Trump, why couldn’t the same thing be said for Cuomo?

The answer is obvious — and yet, the fact there are examples outside of the hypothesis put forward Farhi and Ellison is proof it was poxed to begin with.