If there’s anyone who knows what’s up, it’s degenerate gamblers — and those who set the odds for them.

Not only are there people who bet on how long the national anthem will be at the Super Bowl, but there are oddsmakers diligently working behind the scenes at Las Vegas casinos, plying their knowledge of previous national anthem lengths and combining it with the money coming in to ensure the casinos come out ahead. It’s the visible version of Adam Smith’s invisible hand.

I tend toward the libertarian side of things, so I view this whole wagertopia as a positive development, although I can see the more family values-centric conservatives yearning for the days when this kind of thing was confined to jai alai frontóns in Connecticut.

“Helpful,” however, isn’t a synonym of “encouraging.” The RealClearPolitics betting average for the Democratic Party’s presidential nomination, for instance, is helpful in charting the undulating fortunes of the clown-car field.

It isn’t encouraging, however.

Then, slowly, inexorably, Vermont Sen. Bernie Sanders moved into second place and began creeping up. As Iowa and New Hampshire happened, Biden’s fortunes sank as the reality set in that he was the Willy Loman of the Democratic field: liked, but not well-liked. The moderates in the party shifted toward a figure who was very immoderate in many ways.

Long story short: Now that people are voting, RealClearPolitics has the odds at 77 percent that either a guy who honeymooned in the Soviet Union or a man who wants to ban your Big Gulp is going to be the presidential nominee. 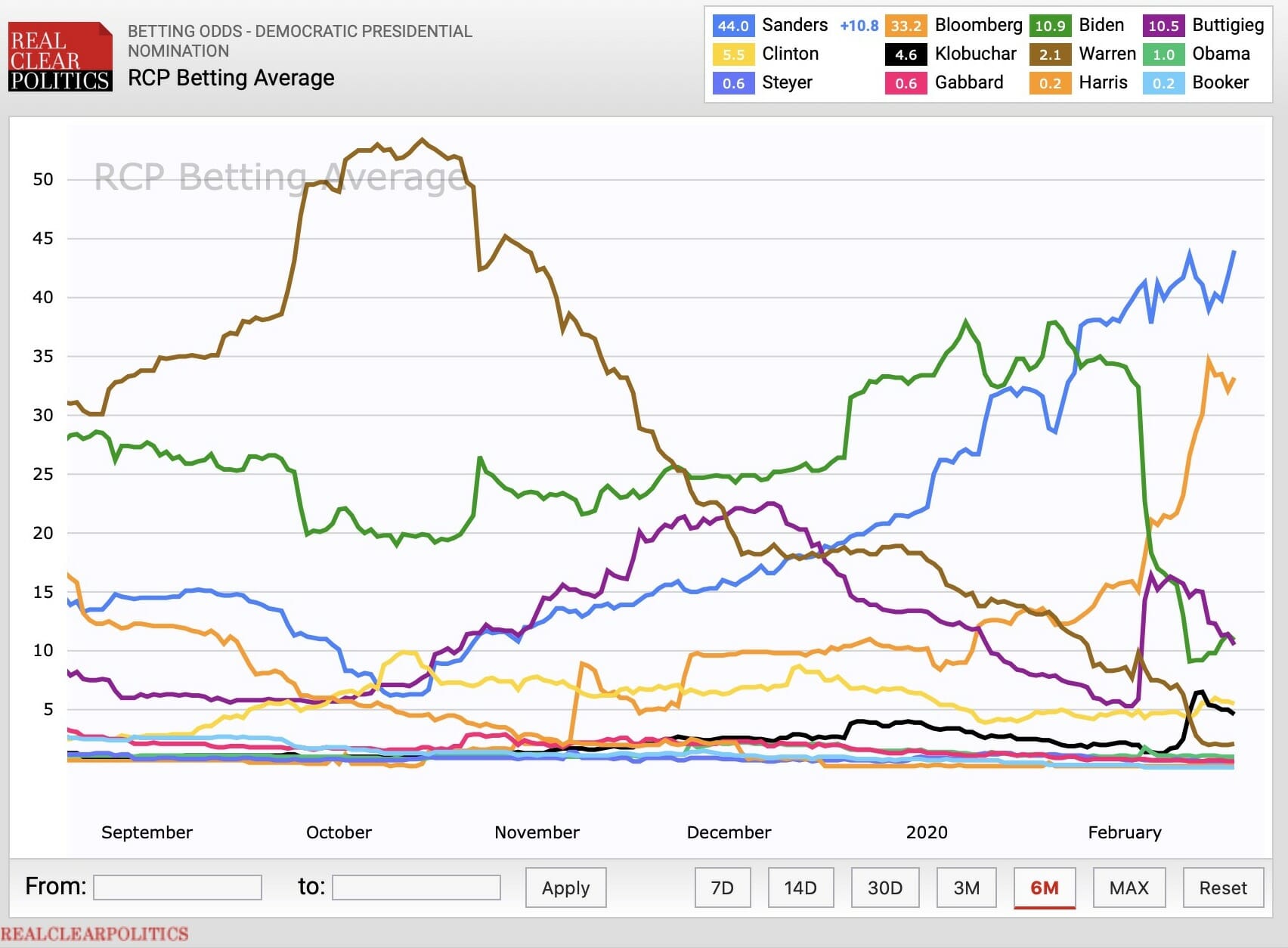 That’s the chart as it stood Wednesday morning.

The blue line is Sanders, who has been the betting favorite for quite some time now. The RCP odds give him a 44 percent chance of winning.

Meanwhile, that orange soda-colored line you see creeping up is a man who wants to make sure you can’t buy a 16-ounce orange soda — former New York Mayor Michael Bloomberg, who’s now at 33.2 percent.

Yes, I know — I’ve been rained on by less than that, but that’s just ahead of Buttigieg at 10.2 percent.

Buttigieg has absolutely no national support, no support from the party’s influential minority bloc and no real path to the nomination aside from hoping that no one gets enough delegates and he’s able to cash in the surprising number of establishment contacts he has. (Indeed, The Daily Beast reported last August that Buttigieg was already courting superdelegates, the Democratic Party figures who would likely decide the nominee if none of the candidates arrives at the convention in Milwaukee with enough delegates from the primaries.)

The next in line in the betting pantheon? Hillary Clinton, who isn’t even in it.

No one else is above 5 percent.

As you can see, these numbers fluctuate regularly. This is far from a static race.

However, things get a lot less abstract and a lot more concrete once the voting starts — and what the markets think is that a lifelong apologist for communist regimes and a guy whose entire skill set is as a nanny-stater in New York City are the heavy favorites in November.

As a conservative, this could be somewhat encouraging.

Bernie Sanders is, one would hope, unelectable. Yes, he polls well against Donald Trump — for now.

As you can see in the media coverage, people are starting to question how his proposals would be affordable. They’ve also started to look at the toxic behavior of some of his supporters, a topic that’s reared its head not infrequently these past few weeks.

Once this gets looked at in earnest — and the Trump campaign plays up the fact this is the first avowed socialist to ever be the nominee of a major political party — he should be done.

Then there’s Bloomberg, who’s the new darling of the establishment leftists. Their entire argument for him is that the Democrats have to pick the most electable candidate because they believe Trump is, in part, a vulgar, petty, bigoted billionaire whose treatment of women is appalling and who’s overfond of using the power of the federal government in heavy-handed ways.

As their counter to Trump, many of them have thrown their lot with a man who’s all of these things.

And then there’s the discouraging thing about these numbers: I could be entirely wrong. One of these men could be our next president.

That’d be a bitter drink to swallow. The only upside I could see there is that Bloomberg might indeed ban that drink, given his tendencies.

This is your Democratic Party, folks. It’s gone far enough left that Bernie Sanders is the unquestioned favorite for the nomination. The “moderate” in the race is a power-mad billionaire who wants your guns, your nicotine and your sodas.

For all I know, neither may be the nominee.

However, the mere mindset that would have these two men — both willing to sell out American values in the most flagrant of ways — as 77 percent favorites in the betting odds for the Democratic presidential nomination should impress upon conservatives how important 2020 will be.

This isn’t just “Fortnite,” and it’s not just a game.

Mexican authorities have requested that a U.S. citizen be extradited to face charges in the death of a North Carolina woman.
By Carson Choate  November 26, 2022
Next